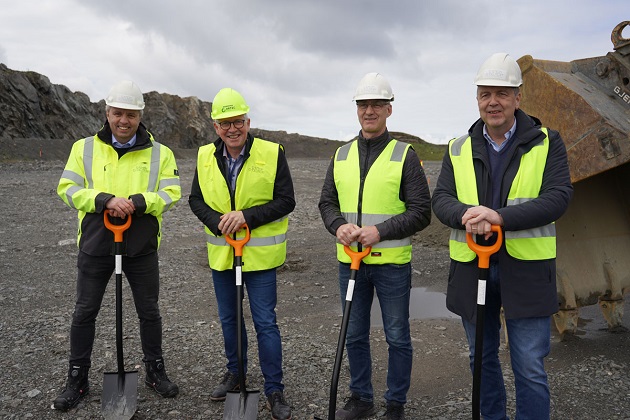 When completed, the company touts its project to be “one of Europe’s largest fish farms on land.”

The first construction stage will provide the capacity to produce 9,000 tons of fish per year. Production will rise to 36,000 tons when the whole project is completed, according to a press release from the company.

Salmon Evolution’s plans call for the first smolts to be in place during the fourth quarter of 2021, with harvesting starting a year later.

The idea of establishing a 12-hectare site aquaculture facility in an abandoned quarry emerged several years ago, when the instigators of the scheme saw that the site would be perfect for land-based salmon farming.

Founders Ingjarl Skarvøy, Per Olav Mevold, Kristofer Reiten and Jonny Småge said they were motivated by a “desire to create something” in their own region of western Norway.

“The project will create many new jobs in itself, but the spin-offs are perhaps even more important,” said Reiten. “Just imagine the experience we and all the others involved will secure through it. We’ll be sitting on something unique.”

“Technology development and new business opportunities will emerge, and the region will definitively be put on the map both nationally and internationally,” he added.

“Starting construction is an important milestone for us, and a clear signal that land-based aquaculture will be an important supplement to conventional fish farms,” said Håkon A. Berg, acting chief executive officer of Salmon Evolution. Berg was appointed chief financial officer of the company in November last year.

He said the facility will be using fresh seawater to promote growth and fish health.

“We believe that utilizing flow through technology with reuse will give us a lower risk profile than many other projects,” said Berg.

Salmon Evolution raised a total of $24-million in March for the project.