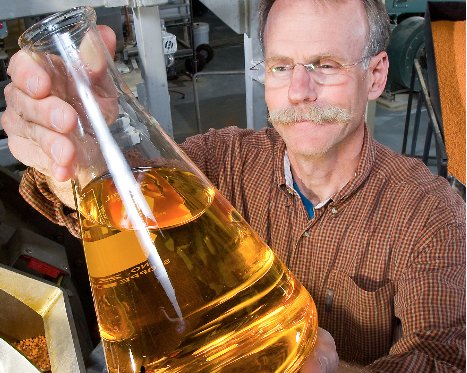 He and his colleagues (Jason Frost, Steven Craig, Mark Portman, and Clete DeShazer) first determined the optimal temperature for juvenile coho reared in an intensive culture system, and then conducted a feeding trial that had three objectives: The first was to determine if dietary lipid could be reduced without compromising growth, but resulting in a decrease of visceral fat. The second was to develop feed formulations using different soy products as alternatives to fishmeal. And third was to evaluate their effect on fish performance.

For the temperature study twenty-five, 7g fish were held for six weeks in each of eight tanks supplied with flow-through water at temperatures ranging from 8°C to 22°C in 2-degree increments. After six weeks, maximum growth was observed in the 16-18° temperature range.

In the diet trial, nine dietary formulations were fed to three replicate tanks of thirty 22g salmon for twelve weeks. Both a fishmeal and fishmeal-free diet were formulated to contain either 22% or 18% lipid. The remainder of the experimental diets were fishmeal-free (FMF) and contained 18% lipid. The protein contributed by soy protein concentrate and corn protein concentrate in the FMF-18 diet was replaced by various different soy products.

After 12 weeks the fastest growing fish had grown over 700% in body weight. There was no difference in growth due to lipid level or to replacing fishmeal in the diets. However, there was an effect of dietary lipid on whole body fat content. Salmon fed the 22% lipid diets contained 32% whole body lipids while those fed the 18% lipid diets had only to 27.6% whole body lipid.

The researchers concluded that acceptable growth (at least equivalent to the commercial control) can be obtained from fishmeal-free diets, and that reducing dietary lipid from 22% to 18% did not reduce growth, but did reduce body fat of juvenile coho salmon.