Features
RAS milestones offer glimpse of what lies ahead 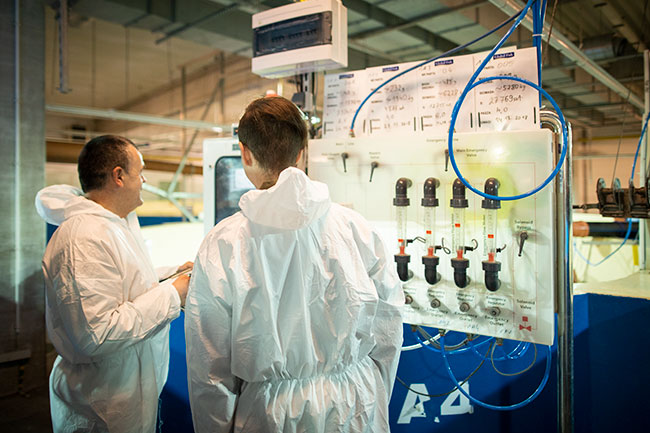 In late September, Atlantic Sapphire harvested its first U.S.-raised Bluehouse salmon in what the company called “a groundbreaking moment” in its history. It could be considered the same for recirculating aquaculture systems (RAS) overall.

This development marks a point when leading players in large-scale RAS have demonstrated they can raise capital, endure the tribulations of permitting, and manage construction, even during a global pandemic.

“RAS in the last few years has proven that it crossed the Rubicon from an experimental to a commercially viable technology,” Ohad Maiman, CEO of The Kingfish Company, points out in a panel discussion at the RAS Virtual Summit held last September. Like Atlantic Sapphire, which was founded in Norway and expanded to Florida, this Dutch start-up also has its sights across the Atlantic – but on Maine. In late September, it received a critical permit for its planned large RAS facility in Jonesport, Maine, producing up to 8,000 tons of Yellowtail.

There is no turning back for RAS now. What’s more, as Maiman’s reference to “crossing the Rubicon” suggests, this technology could be a disruption of historic proportion.

The phrase evokes Julius Caesar who defied the “old guard” by leading his troops across the Rubicon River, launching a five-year civil war fought around the globe. Caesar’s triumph earned him power and influence in the Roman Republic.

Will RAS defeat the naysayers? Will a single production technology dominate the landscape? Which geographies will yield the greatest rewards?

It is unclear at this point how this emerging industry will play out. What is known, however, is that if RAS is to succeed, leadership matters.

Starting with the numbers
There are many key decisions ahead. As the sage Dr. Carole Engle points out in a new book, RAS profitability may hinge as much on the productivity of both labour and capital as production scales. Economically viable businesses, she says, develop based on multiple decisions over time that lead to more efficient production practices.

There are many decisions ahead, and no going back on some.

As Atlantic Sapphire celebrated its first harvest, its eyes were clearly on the prize: satisfying the demand of a U.S. market hungry for salmon. The nation, which imports most of its salmon, currently consumes about 400,000 tons annually.

RAS is ready to compete for a large market like the U.S. because its operating costs are now in the same ballpark as those of net pen producers, according to analysts. This new financial dynamic comes as RAS costs have decreased with scale and the expenses of traditional operators have increased with efforts to combat disease and sea lice, as well as to obtain licences in Norway.

Market demand has also been growing, as the global population increases and health-conscious consumers opt for fish. But the growth in the supply of farmed Atlantic salmon has been falling. It sunk from a strong historic rate of eight per cent annually to six per cent between 2009 and 2018, according to the Mowi salmon farming handbook. Kontali expects growth to diminish further to four per cent from 2018 to 2022.

“The background for this trend is that the industry has reached a production level where biological boundaries are being pushed,” Mowi says. Improved pharmaceutical products and techniques such as wellboats are staying the tide, but RAS may provide the long-term answer.

As Maiman describes on his LinkedIn profile: “When capacity constraints force an established industry to go through a paradigm shift, the sea change can be significant – challenging traditional production methods, while providing unparalleled opportunity for innovative newcomers.” 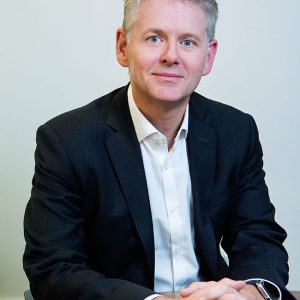 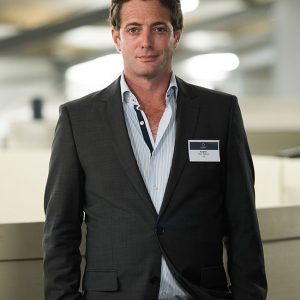 Divergent strategies
Although RAS leaders share the same goals, their approaches are different.

Atlantic Sapphire, which began trading on the Oslo Stock Exchange in May, is targeting high production volume of 220,000 tons annually at a single facility. Located 15 miles from the coast and 40 miles from Miami, it can reach major U.S. markets within two days of trucking, the company says.

With the completion of the first phase of its Florida construction project expected at the end of 2020, the second phase of construction will commence in the second quarter of 2021. Gradual expansion from then on will continue through 2031.

“We basically can build as much capacity as we want because permitting is not a limit. We see that as a huge advantage,” says Thue Holm, co-founder and chief technology officer, during the RAS Virtual Summit.

Sitting atop unique geology, Atlantic Sapphire boasts patented technology to access underground aquifers for fresh and salt water and a system of injection wells for discharge.

The company has been harvesting Atlantic salmon from a land-based, “proof of concept” facility in Denmark since 2011, building know-how as it goes. And it hasn’t all gone smoothly – for example, in March, Denmark lost a tankful of 227,000 fish due to high nitrogen levels. But, in Florida, some of the risks are mitigated by the plant’s 12 separate grow-out systems, and these independent systems will increase as the facility expands.

Like Atlantic Sapphire, Nordic Aquafarms piloted RAS in Denmark at its Sashimi Royal operation, which began harvesting Yellowtail kingfish in 2018. A second land-based farm in Fredrikstad, Norway, which started harvesting Atlantic salmon this year, is another notch in the company’s belt.

But, unlike Atlantic Sapphire’s approach with a mega-facility, Nordic Aquafarms has opted for separate U.S. facilities in Maine and California and, at this point in its development, emphasizes in-house engineering expertise.

Demonstrating the agility RAS leaders need, it acquired that skillset by acting quickly to hire six staff members from its RAS vendor – when it went bankrupt. That internal expertise is paying off.

“It takes out the risk related to vendor support and their capacity issues,” says president Erik Heim, who also participated in the RAS summit. Close, daily interaction among internal design, production, and engineering teams has allowed “a lot of pretty rapid iterations that otherwise may not have been so easy with a traditional vendor,” he adds.

But permits for its large-scale RAS operations in Maine and California have been significantly more challenging than what Atlantic Sapphire faced in Florida. Progress in Maine has also been held up by a lawsuit involving ownership of the intertidal zone which Nordic Aquafarms needs to run intake and outtake pipes.

The delays and headaches do not seem to ruffle the company, however. “I think this is part of the learning process and journey for every company going into (RAS),” says Heim. Nordic Aquafarms is backed by private investors, including the family office of Norwegian shipping magnate Einar Rasmussen.

For its part, the Kingfish Company launched with Yellowtail kingfish as its core species. “We often joke that we have borrowed a page from the Tesla playbook, where yellowtail is our Model S,” says Maiman.

This high-value species is the focus of its current facility in the Netherlands and will remain so in Maine at the new location, fewer than 100 miles east of Nordic Aquafarms. With production from both sites targeted at 20,000 tons, the sashimi-grade Yellowtail helps make the numbers work: a higher price point, still competitive with imports, will offset the higher costs of smaller RAS farms.

To fund four RAS projects under the umbrella of Pure Salmon, this year 8F Asset Management raised $360 million from “long-term strategic investors who really understand what we do,” says Martin Fothergill, co-founder and partner of the global asset management company.  Headquartered in Singapore, 8F is a group of former Deutsche Bank executives which created Pure Salmon to realize its “impact investing” strategy.

8F is taking a cue from a risk managed portfolio approach as it aims for Pure Salmon to be a global player with a local footprint.

“Our analysis shows that the 10,000- to 20,000-ton production facility gives enough economies of scale at the local level, but still represents a manageable construction project and farm and also doesn’t over-concentrate market risks,” says Fothergill at the RAS Virtual Summit.

With a “proof of concept” facility near Warsaw, Poland, that will double as a training facility, the company is planning salmon farms in France, Japan, and the U.S., all engineered using RAS from AquaMaof. Site work on the Japan facility has started, with the others in pre-construction. Together, this first-stage effort is targeted to yield over 40,000 tons during the next few years.

But 8F is already eyeing China. “It’s simply a market that can’t be ignored,” says Fothergill, noting China represents one-third of all global seafood consumption – seven times more than North America. “And we all know it›s already the six largest salmon consumer in the world.” Pure Salmon plans to have five plants there, with total production of 100,000 tons.

There will be a total of 16 vertically integrated production and processing facilities to serve local markets around the world, with a total production target of 260,000 tons. He says the structure will not be unlike multinational firms which operate in multiple markets, with certain centralized functions – buying of feed, brand management, quality assurance, and training. This salmon empire will be managed by a team based in Abu Dhabi.

Fothergill emphasizes how important the next five years will be for RAS to win its “rightful position” in the mainstream of salmon production. 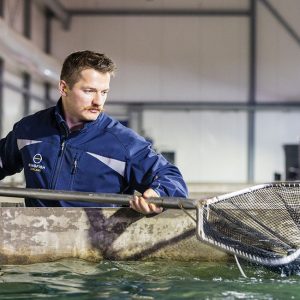 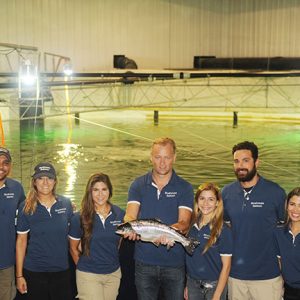 Atlantic Sapphire CEO Johan Andreassen, with his team at the Bluehouse facility, holding up a harvest-size salmon during the company’s first harvest event in September 2020 (File photo: Atlantic Sapphire)

The Norwegian factor
More than a dozen land-based RAS facilities are in the works for Norway – for grow-out, not smolt production. These plans buck the trend of locating large-scale RAS operations close to major markets and are reminders of Norway’s outsized role in global aquaculture.

Although they may not be making headlines, such ventures can boast RAS expertise outranking many of the firms that do.

For example, Havlandet Aquaculture, with 17 years raising cod smolt, has started construction on a pilot facility with capacity to grow out 30,000 tons of Atlantic salmon annually.

The RAS venture Kobbevik og Furuholmen Oppdrett (KFO) is owned by the conglomerate Austevoll Seafood, which also owns Leroy Seafood. KFO’s 10,000-ton-capacity facility will be built in Fitjar, also home to Leroy’s Sjotroll smolt farm, one of the largest in Norway.

Such leaps from RAS smolt expertise to full grow-out capability beg the question: how will Norway’s traditional net pen leaders move next?

They have been growing smolts bigger and bigger, after all. Production of post-smolts (250-1,000 grams) has become more common in recent years, accounting for 9.1 per cent of the individual smolts released in 2019. That is according to Mowi’s Salmon Farming Industry Handbook 2020, which also notes that the most frequently harvested weight in Norway is four to five kilograms (GWT).

The driving force behind this practice is to increase overall salmon production by lowering the mortality that occurs at sea due to sea lice and disease.

Smolt production in RAS is not new, of course. Chile, with more limited freshwater resources than Norway, introduced industrial-scale RAS facilities for smolt production. In fact, the first such plant was built in 2001 for Pesquera Camanchaca.

It is still too early to know if savvy and well-timed adoption of RAS for grow-out will ensure Norway’s ongoing dominance in salmon production.

Or the key may be a hybrid technology. Andfjord Salmon successfully attracted capital to begin construction of the world’s largest flow-through salmon farm. It combines “the best of both worlds,” as the company says: fresh, cold seawater (like net pens) and protection from the risks of sea lice, algae and fish escapes (like RAS).