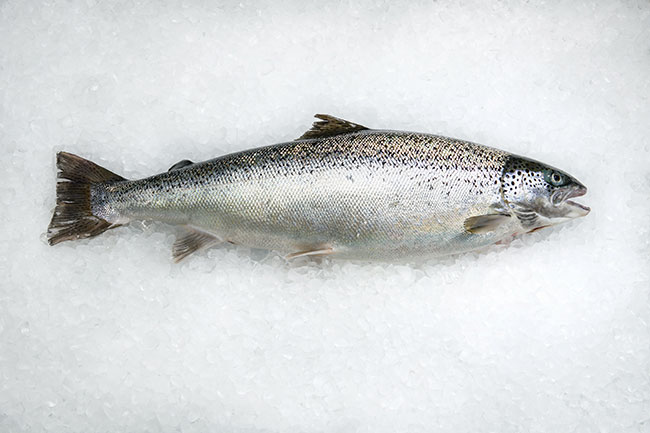 Travis May (MBA) is aquaculture production manager at The Freshwater Institute in Shepherdstown, WV. He manages daily operations of all fish culture systems, including preventative maintenance, data collection and analysis, bioplan development and harvest logistics.

Salmon grown in RAS often accumulate off-flavor compounds that can have significant implications to the producer’s business bottom-line.

This off-flavor is produced by a range of bacterial species in microbial biofilms, resulting in an unpleasant “earthy” or “musty” flavor in the fillet. To mitigate the risk of off-flavored product reaching (and offending) consumers, producers can depurate or “purge” live fish prior to harvest.

During the depuration process, harvest-ready salmon are placed in a biofilm-free flow-through or partial water re-use system and taken off feed for approximately six to 14 days, depending on a number of variables. Fish utilize internal energy stores to sustain them while they metabolize off-flavor compounds during this process. This, in turn, results in weight loss. The ability to quantify these losses can help producers optimize their purging process while increasing the accuracy of bioplanning and financial projections.

Methodology
The Conservation Fund’s Freshwater Institute recently conducted a study to evaluate how much salmon biomass is lost over the six to 14-day purging period. Seventy-seven harvest-ready, RAS-grown Atlantic salmon (average weight of 7.38 kg), were anesthetized and injected with passive integrated transponders (PIT) for individual fish identification. Once PIT tagged, individual salmon initial weight and length data were collected and identified for Day 0 prior to purge. Salmon were then divided into two groups and stocked into two separate, biofilm-free partial re-use systems with five-cubic-meter culture tanks. Average water temperature was 13.6 °C for the duration of the experiment. The first group, comprised of 17 fish, were all removed from the tank, anesthetized and weighed before being returned to the system on Days 6, 10, and 14 post-stocking. The second group of 60 fish were used to study blood loss and head-on gutted (HOG) loss over the 14-day period. On Days 0, 6, 10, and 14 post stocking, 10 fish were removed from the population, anesthetized, and humanely euthanized by a percussive stunner. Weights of each fish were collected before and after euthanization to capture blood loss, and weighed once again after the fish was eviscerated.

Effect on biomass
Salmon from Group 1 lost 4.2 percent of their initial bodyweight over the entire 14-day purging period. The largest weight loss was from Day 0 to 6, when fish lost 2.1 percent of their body weight. A portion of this initial weight loss can be attributed to the excretion of waste material from the gut.

Weight loss associated with bleeding harvested fish was relatively constant at each sampling point, averaging 1.6 percent of the Day 0 initial body weight. Blood is normally discarded, but has potential to be further processed for use in the medical field. Like blood loss, weight loss from viscera removal remained relatively constant over the purging period and averaged 9.9 percent of the Day 0 initial weight of the fish, accounting for 757.8 g per fish.

Producers that purge their fish for a minimum of 6 days could see as much as 13.1 percent total weight loss. If off-flavor issues remain after 6 days, and purging needs to be extended to a 10-day or 14-day period, the total weight loss increases to 14.9 percent and 15.6 percent, respectively. Producers should therefore minimize the time fish spend in depuration in order to minimize the weight lost. To accomplish this, producers need to have effective standard operating procedures for depuration, in-house quality assurance/quality control for harvested product, and an understanding of the effect that physiological and environmental factors have on off-flavor mitigation.

The bottom-line
Weight loss from purging has a direct effect on revenue and potential profits. For example, a 10,000-metric-ton land-based RAS salmon farm that purges their fish for a six-day period every harvest, loses approximately $1.5 million per year due to product loss equivalent to 2.1 percent of biomass lost. If the farm must increase their purging period to 10 days, they will lose an additional $1.019 million per year in sellable biomass. Projections are based on the year-to-date average price per kg HOG for salmon in the 7-8 kg size class ($7.33/kg HOG).

Final considerations, future work
There is still significant work to be done by researchers and producers to fully understand the impacts of purging on farm productivity and profitability. Producers should optimize their depuration procedure to strike a balance between eliminating off-flavor compounds while minimizing weight loss and, therefore, revenue loss. This requires production managers to create, test, and rigorously follow purging SOPs that eliminate off-flavor compounds as fast as possible. Additionally, researchers should seek to develop technologies that eliminate the need for purging entirely, allowing for fish to be harvested directly from the tank. Eliminating the need for purging will be beneficial to both fish and producer.