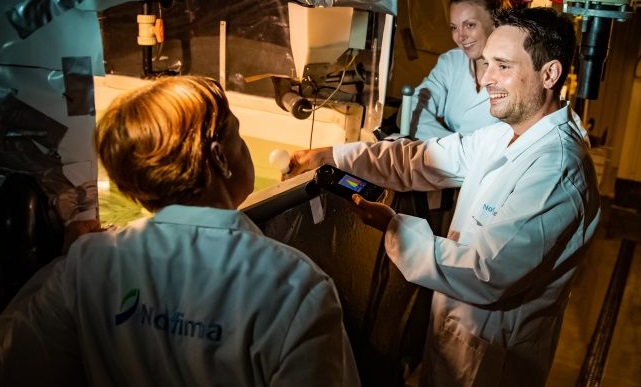 In the last few years, the energy efficiency and brightness of LED lights have  allowed the product to displace the ubiquitous incandescent bulb in many homes and buildings. With LED light prices continuing to drop, it’s becoming widely used in aquaculture facilities as well.

The thing is there is very little information on how LED lighting affects fish in closed containment environments such as recirculating aquaculture system (RAS) facilities.

Recently, the Norwegian fisheries and aquaculture research body Nofima conducted a study on the effect of LED light on salmon performance.

Existing lighting conditions in RAS facilities appear not to have a negative impact on growth and mortality rates of salmon, according to Jelena Kolarevic, a senior scientist at Nofima, and the project leader of the research on light being done by CtrlAQUA.

“However, we still know little about how the light affects salmon physiology and how they cope with the change in lighting condition after transfer to sea water,” she said in a post on the Nofima website.

CtrlAQUA is a centre for research-driven innovation. Its aim is to develop technological and biological innovations that will make closed-containment aquaculture systems a reliable and economically viable technology in aquaculture.

Typically, RAS are managed without in-loop disinfection. With this method, more particles and organic substances are present in the water. This has the tendency to prevent light from penetrating the water column.

Light is traditionally used in salmon farming to regulate the timing for smoltification.

In their study, the scientists used two light intensities (0,25 and 1,9 µmol/m2/s) and two light qualities (white LED and full-spectrum LED).

Post-smolt salmon that have passed the smolt stage, were illuminated for 90 days, after which the scientists measured the water quality and salmon growth and mortality.

The researchers found that  a light intensity higher than 0,25 μmol/m2/s does not affect the fish’s growth and survival in the RAS facility.

“In the current large tanks with a depth of up to five metres, it will be difficult for the fish farmer to be able to distribute the light evenly without major investments,” she said. “It’s a challenge the industry has begun to look into.”