Features
Made in Japan 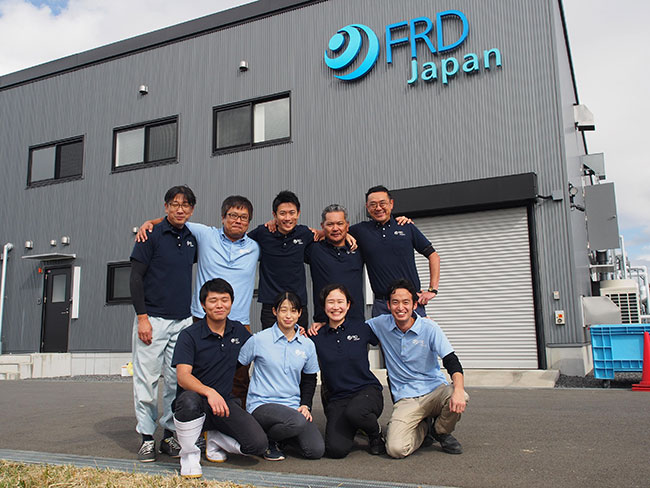 The team at FRD Japan’s headquarters in Saitama, Japan

Thanks to its affordability and high fat content, salmon is becoming increasingly popular in Japan. In 2017, it was ranked the country’s favorite sushi topping for the sixth consecutive year by the seafood firm Maruha Nichiro.

Japan’s commercial salmon market is supported by large-volume imports from countries like Norway and Chile, but to capitalize on the popularity of salmon, regions in Japan have been vying to produce the species themselves. Now, these efforts are beginning to bear fruit with new RAS projects across the country.

Land-based production systems have various advantages – they treat and re-use water, typically use bio-filtration to reduce ammonia toxicity and can be sited closer to urban consumption areas, making it possible to lower transportation costs and distribute fresh produce.

In Japan, RAS is advantageous for another reason. Farming salmon offshore is difficult due to high water temperatures in the summer. This restricts offshore salmon farming to the winter months and farmed salmon must be imported from colder climates.

Turning Japanese
Tetsuro Sogo, chief operating officer at FRD Japan in Saitama Prefecture north of Tokyo, is tapping into the potential of farming salmon inland. He hopes that his work will lead to cost-effective, land-based farming and homegrown salmon for the Japanese consumers.

“The global demand for seafood has been rising each year, and aquaculture has expanded vastly over the last 30 to 40 years to meet it,” he says. “The global population is currently around seven billion. If it reaches 10 billion in 40 years’ time, naturally, the global demand for seafood will keep rising. But it’s impossible to farm certain fish at sea now. Salmon farming, for example, is mainly done in Chile and Norway, but even in those countries, only a few new licences are being issued for aquaculture because the sea is already full of cages. Put simply, supply is not catching up with growing demand.”

FRD Japan uses advanced bacteria-based filtration technology to cycle artificial seawater – tap water and added salt – through a closed containment environment. A two-stage filtration device then uses bacteria to break down any build up of ammonia into nitrogen gas, while a separate denitrification tank deoxidizes these nitrates and releases harmless nitrogen from the water.

One advantage of this system is that it stops the entry of bacteria and viruses in seawater that are often the cause of disease, and can be set up anywhere with a tap water source. It also keeps the water temperature steady at 15 degrees celsius, maintaining low electricity costs.

“Salmon farming needs cold water of under 15 degrees celsius,” says Sogo. “If your site is in Asia and the seawater is 30 degrees celsius, you need to chill it and this can incur high electricity costs. This is a huge issue for conventional RAS but we can save on costs by keeping our temperature steady.” 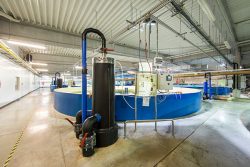 Pure Salmon uses RAS technology from AquaMaof, which has a R&D and training facility in Poland. 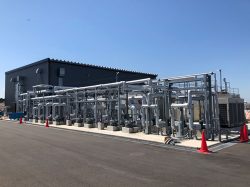 Asian invasion
In the long term, Sogo believes that land-based aquaculture will develop the most in Asia, and says new innovations, such as his, will be key to an industry that must make further investments and developments to meet demand and become more sustainable.

Another entrant to Japan’s RAS salmon market is Pure Salmon. The company is building a 10,000-ton-per annum facility in Japan’s Tsu City using technology from AquaMaof Aquaculture Technologies Ltd in Israel. Atlantic salmon will be produced and sold under the name, “Soul of Japan.”

Construction of the facility is expected to finish in 2021, with fully integrated processing and packaging on site to produce fillets, smoked salmon and other market-ready products.

“RAS is a necessary and supportive technology to the sea-based farming industry,” said Shai Silbermann, vice-president, marketing and sales at AquaMaof. “The growing awareness of healthy eating, food safety, traceability and the need for sustainable food production practices highlight RAS’s unique attribution in these domains.

Pure Salmon’s facility will recirculate over 99 percent of water using filtration and oxygenation systems. Multiple RAS rearing units will be housed under strict standard operating procedures to maximize growth conditions. Water entering the facility will be collected into settling pools and moved to biofilters for cleaning and treatment. It will then be recirculated back into the pools for rearing.

Eggs from Iceland will be hatched in a biosecure environment before being transferred to pools when they reach the smolt stage. Although initially smaller, the pools will become bigger as fish densities grow. The process will be replicated through all stages of the salmon lifecycle until the fish reach harvest size.

At the core of the technology is efficient power consumption, while the purity of the water will ensure the absence of disease and sea lice and negate the use of antibiotics or pesticides. Optimized feeding modes and an advanced feeding management system will enable better feed conversion ratios (FCR) and operational costs. Automated sensors will measure, observe and monitor key parameters such as water and temperature. The technology is designed to closely replicate the positive qualities of a salmon’s natural environment.

Ripe for RAS
Erol Emed, Soul of Japan’s CEO, says that establishing a RAS facility in Japan has various benefits.

“It’s a highly advanced country with great infrastructure when it comes to electricity, water and water discharge,” he says, referring to the continuous power supply needs of RAS facilities.

Emed says the promise of locally produced premium salmon has caught the interest of customers in the Japanese market, who have been positive, receptive and supportive. Operating to best practice standards and demonstrating that sustainability is taken seriously, Pure Salmon is aiming to provide safe, environmentally friendly fish.

“In 2018, the marine industry took a big hit from parasitic anisakis, the number one cause of food poisoning,” he says. “Consumers shunned fish because of that. We’re offering a healthy product that’s a highly valued commodity if your target consumers eat fish raw.”

Last year, Soul of Japan signed a distribution agreement with Itochu, one of Japan’s largest trading houses, for a period of six years – a deal that could be worth US$1.2 billion at today’s retail prices.

“Itochu knows there is a 10-year deep wave in the making here, which will favour Atlantic salmon. Supply reliability is key,” says Emed, referring to salmon’s increasing popularity among Japanese consumers. “Open net farming is prone to parasites, uses antibiotics and can be unreliable, while we can deliver healthy fish, and guarantee supply.”

Soul of Japan’s fully integrated processing factory will also conduct pre-rigor processing. The difference in taste will be significant for those who eat fish raw.

“We already have great FCRs, low mortality and a biosecure environment,” said Emed. “Now we’re looking at improving what we already have – high quality – so producing an even better taste, making our feed fit the RAS environment, and improving fat content and overall wellness of the fish. The happier and better the fish, the better the taste and, of course, this is better for customers and the environment.”