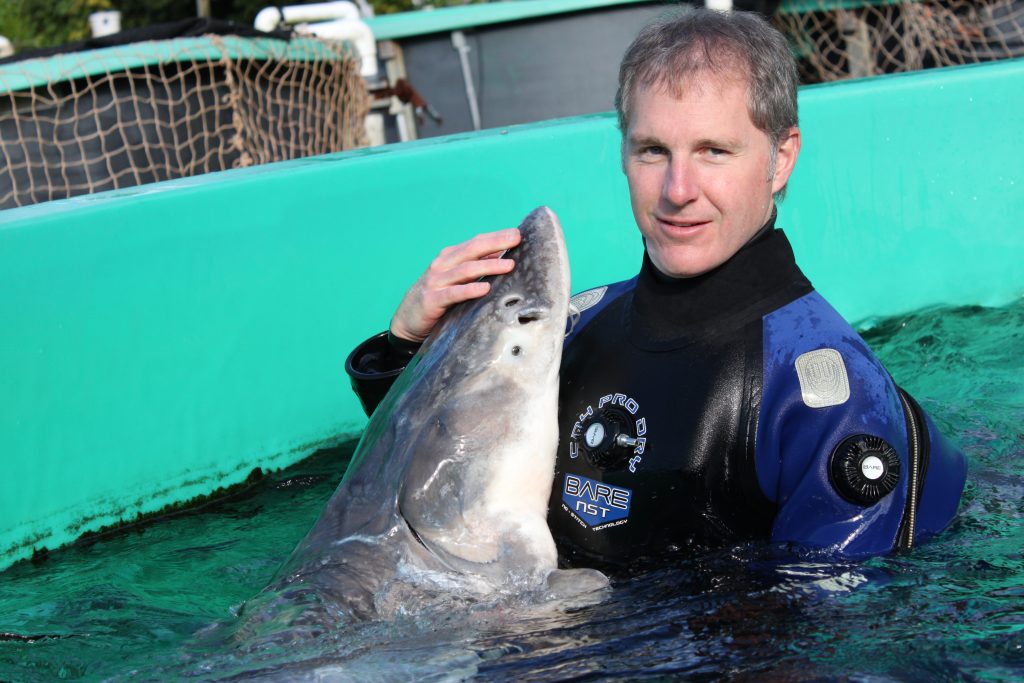 At Northern Divine Aquafarms, we first used RAS to grow salmon smolts in1998. This was before the term “RAS” was coined and we just called it “recirc”. We soon realized that this technology allowed us to produce smolts six months earlier and three times as big when compared to our flow-through system. I remember thinking “why would you grow fish in anything else?” Lots of people had the same idea which led some to start growing fish right through to harvest in RAS.

It was 17 years ago that we started to harvest our first RAS-grown sturgeon for meat. Today, the sturgeon, caviar and coho salmon grown at Northern Divine have the cleanest taste possible at harvest; however, that is not how it started 17 years ago.

Farmers growing fish such as catfish in ponds have been battling this problem for years, though many others who grow fish in net pens or flow-through systems have, for the most part, not historically encountered this challenge. When RAS came along there were initially no problems with off-flavour since most of the production was for smolts which no one was eating.

As farmers realized the benefits of growing fish in RAS, they started to experiment with growing several species to market size. Unfortunately, in many instances, the market knew there was a problem before the farmer.

One of our first harvests of sturgeon for meat went to a banquet at an aquaculture conference 15 years ago. Various types of seafood were served at different stations throughout the venue. The first sturgeon that came out was delicious; this was the first time that many people had ever tried sturgeon. An hour or so later, they refreshed the platter with meat from the next fish they cut. And oh oh. This one had a slight muddy off-flavour. I didn’t know why it tasted that way, but we quickly realized that we needed to find a fix.

Nature of the problem?

A muddy off-flavour in fish is bad for business, and fish coming out of many RAS have off-flavour. The amount of off-flavour will vary with the system, water quality parameters, species and size of fish, and even individual variations. Wild fish from certain lakes and rivers also have this off-flavour. Consumers don’t want to eat fish with that flavour and they won’t likely buy it a second time. An even bigger problem is that they may stop buying that genre of fish altogether.

What is the cause?

Compounds causing off-flavour in the water also get into the fish. The main compounds are the naturally produced organic chemicals geosmin and 2-methylisoborneol (MIB). These compounds are produced by certain bacteria (cyanobacteria andactinomycete). If you want to read all of the gory details, check out the excellent summary by Davidson et al in Aquaculture Engineering 61 (2014) 27-34 or other published papers from the Freshwater Institute.

By design, recirculating aquaculture systems grow plenty of bacteria. The systems need nitrifying bacteria; thus, biofilters are designed to optimize surface area and living conditions for bacteria. The bacteria which produce geosmin and MIB also live there and the off-flavour causing compounds enter the fish via the gills and then accumulate in the fat. The fattier the fish, the worse it will be. The more geosmin and MIB in your system, the worse it will be.

There is only one solution and it is very simple – depurate, purge. (But let’s not call it that anymore for the sake of our customers). Let’s call it “conditioning” or “finishing” which sounds a little more delicious and safe. Whatever you call it, it requires taking your fish out of the RAS and putting them either on flow-through water or onto another water source that does not contain off-flavour compounds.

Many methods don’t work. We can’t just kill all the bacteria in a RAS because, as we discussed, we actually need some of those bacteria. There has been research on ozonating the culture water which has not been successful. Nam-Koong et alAquacultural Engineering 70 (2016) 73–80 demonstrated that treating the water with ultrasound will remove off-flavour compounds from RAS, but the energy required would not beeconomical.

For now, farmers have to transfer the fish into a “finishing” system. But for how long? That depends on many factors including the level of geosmin and MIB in the culture water, the species, size, and lipid content of the fish, the water temperature, etc. You can read reports that suggest anything from less than one day up to three weeks of conditioning. To finish caviar takes longer . . . way longer. When I attend trade shows where caviar companies have their booths I go from one booth to the next sampling their caviar. “How does it taste?” they ask. “Like mud,” . . . I think. The next booth, “like dirt”. The next booth, “like earth”. Wow. How can you grow a fish for so long and then harvest it with an off-flavour?

Basically, producers have to condition their fish until they can’t taste off-flavours anymore and that will be different at every farm, varying with every variable. And there will also be variability from fish to fish, so don’t limit taste tests to just one fish. Terry Brooks, of Golden Eagle Aquaculture in British Columbia, Canada has the process down to a science. He conditions the fish in two stages where he first reduces the levels of geosmin and MIB in the RAS for a period of time, and then moves them to a new flow-through tank for a very short period of time. By tasting his RAS-grown coho salmon, you could never tell if they were from the wild, from a saltwater net pen, or from his RAS farm in Canada.

“If people get a hint of off-flavour, you’re done,” he says.

So, why is there still a problem?

Some farmers still send off-flavoured fish to market. …Please stop. It’s bad for business. For all of us.

But why does this still happen? There are a number of reasons: some newcomers to the industry have not read the literature; sometimes it takes longer to get rid of off-flavours than the literature indicates; or some farmers have just received bad advice.

How do you know that off-flavour is gone? There is one way and it is very easy: taste it. Taste a few fish. Taste them often. Get good at identifying even the tiniest hint of off-flavour. And then sometimes you have to make the difficult choice to delay harvest. I know that sucks, but ignoring it is probably the main reason that off-flavoured fish still ends up in the market. Delaying means delayed cash flow, change of processing schedule, maybe sending the harvesters or processors home, and telling your customer that they are not getting any fish that day.

If you send the fish anyway, before they have clean flavour, then you are killing your business, and harming the rest of the RAS farmers.

Justin Henry is the former general manager of Northern Divine Aquafarms, a sturgeon and salmon RAS in British Columbia, Canada. He now heads up Henry Aquaculture Consult Inc, an international advisory and consulting service for the aquaculture industry.   He can be reached at:jhenry@aquacultureconsult.com