How revising activated sludge opens a new area of research 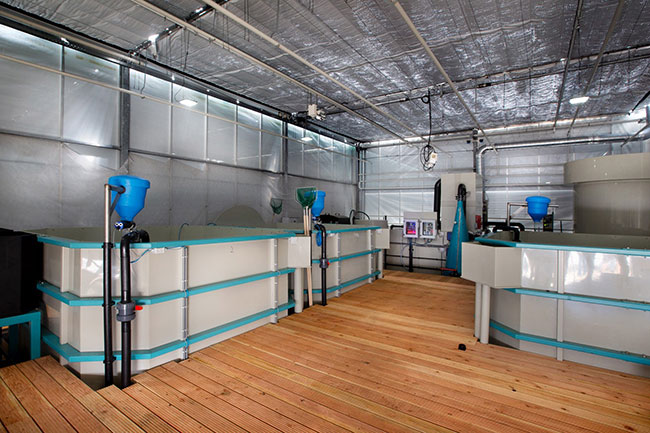 The water recycling capacity of RAS is three orders of magnitude higher than that of flow-through farms and at least an order of magnitude compared to partial re-use systems. Despite the significant savings in water, large facilities will still use and discharge significant amounts of water.

In commercial RAS, water usage is mainly directed towards dilution of nitrate, which accumulates in the system as the nitrifying biofilters oxidize the ammonia excreted by the fish. Thus, the first logical step to increase recirculation rates in RAS is to remove nitrate, which is commonly done using denitrification bioreactors.

This makes the idea of using sludge as a carbon source worth considering. The use of sludge for denitrification has been investigated over the last 20 years and continues to be a subject of research today.

The trials were conducted to evaluate the denitrification performance of a batch-fed, up-flow denitrification reactor which uses a central airlift riser to maintain the sludge mixed and to prevent the formation of a scum layer, commonly found in similar designs such as the up-flow anaerobic sludge blanket (UASB) reactors. Reactor performance in terms of single pass efficiency, volumetric nitrate removal rate and effects on the water quality of the RAS were recorded through the study period, which comprised several reactor shutdowns and restarts to adjust its performance.

Nitrate removal
With the reactor fully working by May 2020, we found that on every batch cycle, the nitrate concentration in the process water was reduced by 150-200 mg/L – about 50 percent concentration measured in the RAS water. The calculated volumetric removal rates for this reactor were 300-500mgNO3/lreactor/day, similar to other single-sludge reactors reported in the literature.

Carbon supplementation
In this reactor and under the operating conditions of the experiment, the denitrification reaction was limited by the availability of carbon. Part of the limited carbon availability was likely caused by the consumption of dissolved oxygen. Oxygen intrusion in this reactor mainly occurred via the process water. 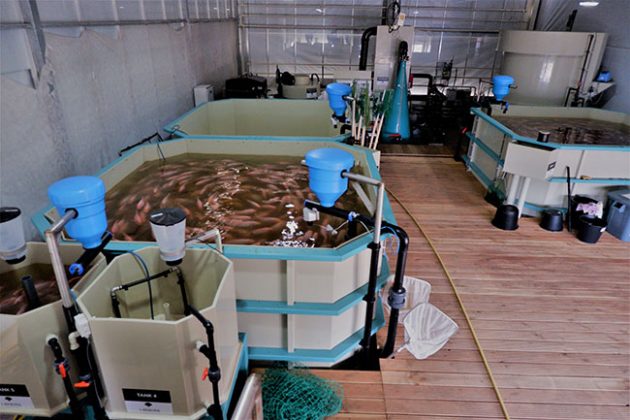 Airlifts in an anaerobic reactor
The use of gas sparging in activated sludge reactors is a common technique to maintain the sludge properly mixed. Gas sparging is used in conventional water treatment, in membrane bioreactors and has also been used in UASB reactors. In a previous work by Müller-Belecke and collaborators in 2013, the nitrogen gas-rich off-gas has been recycled and diffused back into the vessel.

In this work, we designed an airlift which created bubble “slugs” instead of fine bubbles to maximize water circulation and minimize oxygen transfer. During gas sparging, DO concentrations in the reactor were kept below 0.2mg/l at all times. These concentrations were low enough for the reactor to resume denitrification rapidly, but high enough to interrupt it during the mixing cycle. Given the simplicity and cost-effectiveness of the solution, airlifts seem to be a low cost, simpler alternative to mechanical stirrers and gas recycling systems in single sludge reactors.

Effects on water quality
Although the removal of nitrate from the RAS process water was achieved, high degrees of recirculation without removing the solids produced in the system eventually led to blooms of heterotrophic bacteria, akin to what is experienced in biofloc systems. Fish welfare and growth performance remained unhampered. Increased oxygen consumption in the RAS and increased need for system maintenance suggest that sludge reactors must be operated either as end of pipe treatment devices or in combination with a comprehensive downstream solid capture and microbial control step. In this experience, the system’s microscreen drum filter was not efficient in controlling solids coming out of the reactor. The reactor’s effluent, relatively free from solids but highly bioactive, promoted the growth of biofilm slicks clogging the microscreens.

The unexplored realm of the metabolome
RAS and sludge reactors are highly biodiverse environments whose microbial communities are currently being discovered using metagenomic tools. However, there is a new way to look at RAS at the molecular level: metabolomics.

With metabolomics, we do not look at genes, RNA or proteins, but at thousands of small organic molecules that are produced by the organisms in the system. Collections of molecules can become a “fingerprint” which can be used as a baseline to study changes in behaviour and performance of a biofilter, an anaerobic reactor and perhaps, even the fish themselves. With lengthy analytical work, the metabolome can be surveyed for molecules with properties that could be applied to aquaculture.

To our knowledge, Landing Aquaculture in partnership with Wageningen University are the first to conduct a pilot study on the use of metabolomic approaches to study biofilters in RAS. In the sludge denitrification experiment, five replicate samples for metabolomic analysis were taken from four locations: the inlet and outlet of the nitrifying biofilter, the sludge sampling port of the denitrification and the denitrification reactor’s outlet. Liquid chromatography-mass spectrometry (LCMS) profiling was conducted on the samples. Principal component analysis was used to identify differences across and within sampling groups.

Although the analysis led to the identification of at least 3,000 potential compounds, the study focused on comparing the occurrence of these across the samples. Some interesting comparisons include:

Of the 3,000 compounds identified, 789 where only found in the denitrification reactor sludge blanket.

There were 692 compounds shared between the denitrification reactor and the nitrifying biofilter, but these would be twice as concentrated in the first.

There were 12 compounds that were only found at the outlet of the biofilter.

There were 19 compounds that were unique to the nitrifying biofilter, but these were recorded twice the concentration at the outlet compared to the inlet.

A few compounds were putatively identified. Of them, proline – a known plant biostimulant – was found to be 20 times as concentrated in the denitrification reactor compared to the nitrifying biofilter.

Way forward
Sludge in RAS, although a nuisance for most operations and a cause of H2S production, seems to hold some properties which have not been fully exploited: humic acids having antiviral properties, biofloc systems reducing disease transmission, microbially mature water reducing opportunistic pathogen suppression, geosmin and MIB reduction and plant growth promoting effects are some of the potential benefits that have been investigated. However, there is still significant work to discover what molecules are involved in processes we observe. Future work may lead to using metabolomics to control biological processes, to compare operating conditions within and across RAS farms and to find compounds of interest such as antibiotics, antifungals, insecticides, stress modulators and more.

This research work was funded by the EU INNOSUP Horizons 2020 VIDA project.

Carlos Alberto Espinal is the managing director of Landing Aquaculture BV, based in the Netherlands.