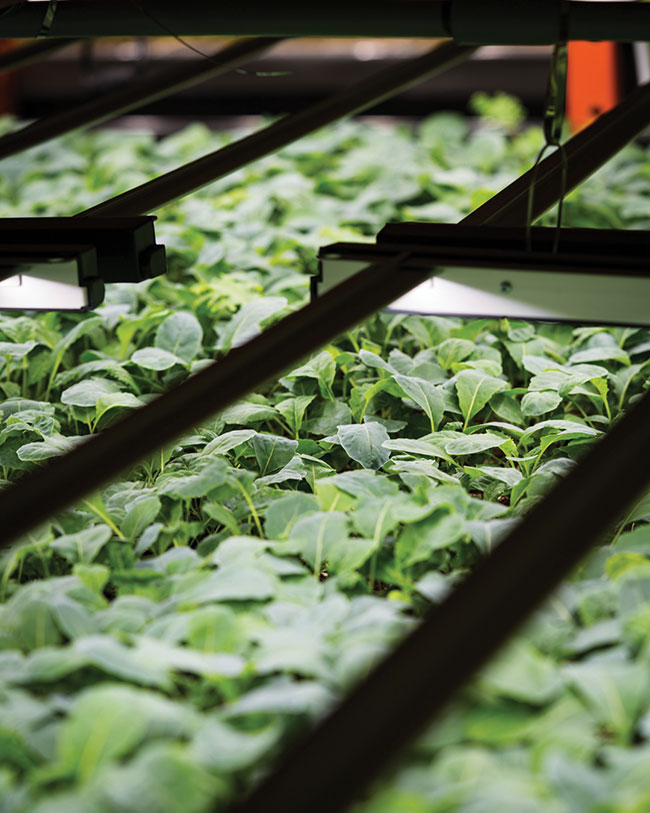 It all began as a backyard science project: entrepreneurship student Paul Shumlich and environmental science student Kevin Daniels started experimenting on the property of the home Shumlich was renting.

“We just wanted to know more about where food is being grown, who was growing it and how to get involved,” says Shumlich. “We just kind of stumbled upon the concept of aquaponics and it really spoke to us.”

The idea developed more and more over as they brought their idea to a variety of business pitch competitions, “similar to Dragon’s Den, but in the post-secondary setting,” says Shumlich. As the idea for what would become Calgary’s Deepwater Farms developed into a business model they felt comfortable moving forward with, they obtained an angel investment and the rest is history. It all comes back to their fascination with the sustainable nature of aquaponics.

“It’s the closed-loop concept – being able to take waste from one stream and turn it into valuable input for another,” says Shumlich. “I like the idea that it’s organic by nature. It’s a living breathing ecosystem.

“Aquaponics is completely organic because you’re using composting and living, breeding bacteria that is just naturally found in the soil. I really like the idea that, opposed to using chemical fertilizers, there could be this natural way of unlocking fertilizers and nutrient solutions for the plant.”

Trial and error
Developing their farm and their process was a long effort involving a great deal of trial and error. There are very few large-scale aquaponics operations in existence, so there were few businesses whose successes and failures could be learning opportunities. None of the members of their team are specialists, but they are very science-minded.

“We’re kind of trailblazing it,” says Shumlich. “We’re making mistakes and learning from the mistakes, because there’s nobody we can learn from. We’ve worked with Lethbridge College on aquaponics and different people like that who have been very helpful for us, but when it comes to commercialization and running the business, there wasn’t really anyone.”

Deepwater Farms’ facility has 25,000 sq. feet of grow space in vertically stacked layers, with eight grow-out tanks and around 10 nursery tanks that hold about 30,000 gallons of water. The farm produces around 2,000 lbs. of sea bass every month and between one and two thousand lbs. of greens each week – baby arugula, mixed baby kale and mizuna mustard greens, as well as a spring mix.

“As a business, we sell mostly plants, but as an operation, we’re more of a sustainable fish farm,” says Shumlich. “The techniques we use, the fish farming is pretty cut and dry recirculating aquaculture. We stocked to organic standards, we seed by hand. We have a purge system to ensure the fish quality is there as we go to market. We do all our netting by hand and grading and counting as passively as possible.”

Paul Shumlich (center, standing) and Kevin Daniels (2nd from left, standing) have come a long way since the backyard aquaponics experiments that were the genesis of Deepwater Farms.

Designing for the future
While everything on the farm is currently done by hand, Deepwater Farms’ system was designed with the future in mind as well – Shumlich says that the system is flexible enough that once they have felt that the business model has been proven enough, they can begin to layer in automation and improve their processes.

Deepwater Farms’ offerings are largely driven by their clients, which include a number of chefs at restaurants around Calgary. Shumlich says they are not in a rush to scale out their product offerings – more product offerings mean more complexity – but are looking to scale up the customer base.

Selling and distribution
Shumlich describes chefs as being at the heart of the grassroots movement in food trends, and having a local and sustainable option for purchasing greens or whole fish has been appealing to many of the chefs they work with.

The development of their fish sales, however, has been an interesting challenge. They always knew that there was a strong demand for the greens, but not necessarily the fish. Like many aquaponics operations, Deepwater Farms was initially envisioned as a 90/10 split between the greens and the fish, but slowly and steadily the fish has become a larger and larger part of their sales.

“When we first started, fish were really hit or miss amongst restaurants,” says Shumlich. “But we found out some of the restaurants that are really kicking off right now were actually buying white fish bones to make fish broth or buying different parts of the fish.

“One of the restaurants really wanted the guts to make a fermentation out of and these different things. So we’ve been able to find the restaurants that wanted a whole fish. It was a challenge, but now it’s paying off. Every single week, all our fish are sold.”

Deepwater Farms currently offers delivery to restaurants and distribution partners around Calgary. They want to concentrate on the market as close to their farm as possible, though they do have product delivered to areas such as Canmore, Banff and Lake Louise in Alberta.

A larger goal is to become the premiere supplier of baby greens and fresh sea bass in Western Canada, but Shumlich says the long-term goal isn’t to ship fish to wider areas from their Calgary site.

“We want to build farms all over the world, to expand nationally and internationally,” says Shumlich. “We’d like to see our farms in as many places as possible and addressing major food security issues. We want to export farms, not food.”