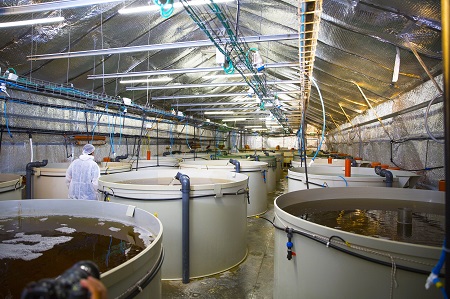 AquaMaof Aquaculture Technologies Ltd. announced that its recirculating aquaculture system (RAS) technology for land-based shrimp production will be ready for the market next year.

The Israeli-based company has spent three years developing its technology for the production of L vannamie shrimp on land. According to AquaMaof, the technology is ideal for obtaining high survival rates and disease-free results in land-based shrimp production operations.

AquaMaof has secured more than $300 million in closed deals around the globe. The company has more than a dozen facilities worldwide.

“Over the course of three years, we are very proud of the achievements we have made, such as high densities of shrimps with no negative effect on growth rates, whilst maintaining a disease-free environment,” said David Hazut, CEO of AquaMaof.

“We decided to adapt our proven integrated RAS technology for the indoor production of shrimp. Moving production indoors in a closed containment environment has enabled us to overcome many of the industry’s challenges and become the first company to offer a commercial end-to-end solution,” he added.

Traditional ponds culture has not been able to keep up with the global demand, due to a continuous struggle with shrimp diseases and high mortality rates. As a result, there is a growing need for land-based technology for shrimp production, he said.

The company’s technology allows operators to improve the color of the shrimp and their genetics. This enables the production of a high-quality end product, according to Hazut.