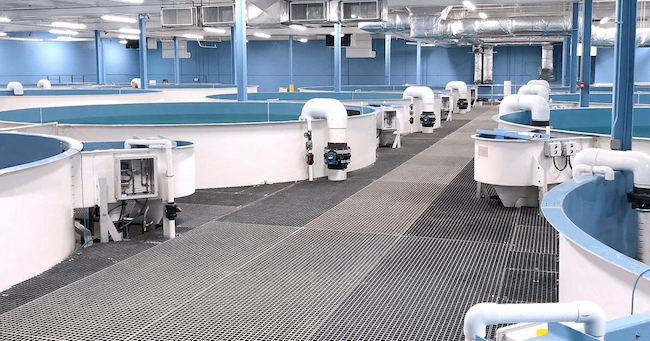 The gas industry is offering up some advice on how to lower the cost of RAS operations. (file photo)

The popularity of land-based fish farming could spell additional business for the gas supply industry – and gas suppliers could hold the key to lowering the cost of entry to the recirculating aquaculture system market.

Providing oxygen to breeding ponds to promote more growth of farmed fish through oxygen enrichment is becoming lucrative for suppliers, according to a report in the gas industry news site Gas Review

“Business is expanding past the supply of oxygen to fish farms toward the sale of oxygen dissolvers for efficiently spreading oxygen in breeding ponds and even sales of complete fish farming systems,” the news site said.

The news site quoted Setsuo Nohara, secretary of Recirculating Aquaculture System Japan and executive adviser to IMT Engineering, as saying that the RAS industry is entering its third boom.

He said the first RAS boom was in the 1980s and the second was in the 1990s. Nohara explained that during the second boom, companies partnered with governing bodies. However, RAS technology failed to attract widespread adoption because the capital cost was prohibitive. In order to recoup their production expenses, RAS operators needed to be able to sell their fish at “reasonable prices.”

In light of these challenges, the cost of equipment needs to be lowered in order to attract new entrants into land-based fish farming, he said.

This is where the gas industry can help.

“Oxygen in cylinders or liquid oxygen is over 99 per cent pure and even oxygen from PSA is 90 per cent to 93 per cent pure,” Nohara said. “However, the oxygen required for fish farming does not have to be that pure. If cheaper oxygen generation equipment can be made available by lowering performance, that would be great.”

He also said that high-density farming is necessary to achieve profitability. For instance, land-based farms need that “at least 3kg of fish is raised for each 1m3 of water.”

“That means a lot more fish than in a natural environment, so it is necessary to introduce oxygen artificially to increase the concentration of dissolved oxygen,” Nohara said.

He said most RAS operators rarely measure oxygen concentration daily. This could be an opportunity for gas suppliers.

If suppliers can propose to RAS operators the ideal oxygen supply scenarios for their facilities “…it will greatly lower the hurdle of introducing systems for fish farmers,” Nohara said.