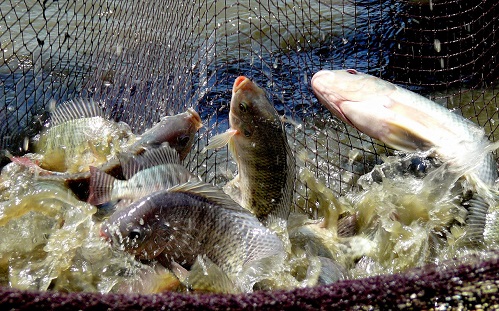 Villagers in Zimbabwe who are growing tilapia in inland ponds are switching from conventional fish feed to a mix of home-grown ingredients in order to cut cost.

Ever since the local currency was un-pegged with the U.S. dollar, the price of fish feed has skyrocketed to US$18 – beyond the reach of many grassroots aquaculture operators. When the government abolished the use of foreign currency for local transactions this June, the cost of 25 kg of feed went up to $350 Zimbabwe dollars or US$23. Many fish farmers were faced with the prospect of losing their ponds, according to a report from the Fishsite.com.

However, thanks to the help of London-based charity, Practical Action, some 200 fish farmers have been able to hang onto their businesses with an idea to assist them in coming up with more affordable, alternative fish feeds.

Innocent Katsande, national spokesperson for Practical Action, said that because of the rising feed prices farmers had scaled back their commercial fish farming projects to subsistence level. Others have completely quit. This spurred Practical Action to launch a feed formulation initiative.

For example, fish farmers were taught to use river tamarind (Leucaena leucocephala) leaves and pods as feed for their fish. Farmers were also taught to grow sweet potato and use leaves as feed.

Some fish farmers pound pearl millet to feed to their fish.

Chicken droppings can also be put in a sack and placed in the pond. This promotes the growth of algae which the tilapia can feed on.

Tilapia can also thrive on degraded soils which are low in nutrients.

The idea is to use locally available raw materials for feed formulation and employ chopping, grinding, mixing and pelleting machines  to address the problem of affordability, said Katsande.

Practical Action is experimenting with  unique agro-ecological approaches to fish farming such as  vermiculture.

For instance, red worms are being bred as food for the fish and also used as vermicompost for fertilizing terrestrial crops.

Four farmers are using aquaponic systems. This enables them to save space by using their fish ponds as a nursery for some of their plants.