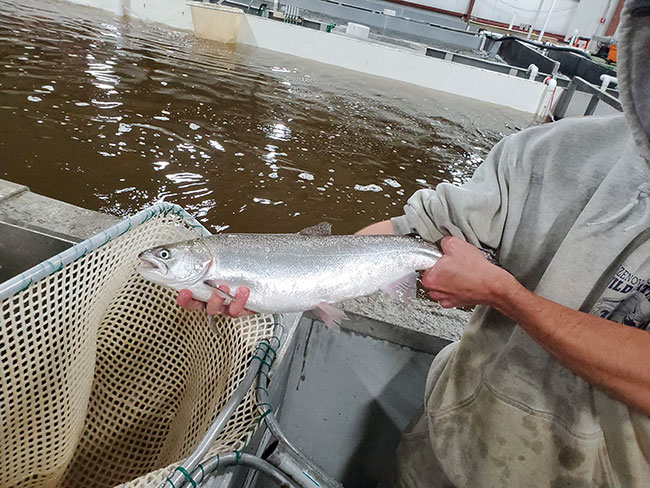 There are many words to describe Finger Lakes Fish but “unconventional” is top of mind. In contrast to the mega land-based farms currently being built in the United States, the company’s approach is to start small with a provable model that could later scale up.

Even its choice of species is unconventional: Coho salmon (Oncorhynchus kisutch) instead of the more popular Atlantic salmon that many emerging land-based fish farmers are gravitating towards.

At its 43,000-sq.-ft. RAS facility on Technology Park Boulevard in Auburn, New York, CEO Phil Gibson and his 15-strong team of aquaculture specialists are in a constant state of learning and adapting to prove this complex and often finicky technology.

But while their tenacity is starting to bear fruits (they’re already certified by Best Aquaculture Practices and by Safe Quality Foods), Gibson would be first to acknowledge that there were many false starts. For instance, the initial decision to use fibreglass fish tanks was scrapped because it was very difficult to keep them from leaking, and COVID-induced disruptions made it very challenging and very costly to get the required tank components.

“At that point it became more feasible for concrete raceways. And because the concrete contractors didn’t have any work because of the pandemic, it kind of worked out for us.”

But as many of the emerging land-based farmers know, after one issue is solved, a few more would crop up because RAS technology is still in its infancy as far as its use in salmon grow-out operations.

After switching fish tanks, the next U-turn was on the choice of a local plumbing company.

“There’s a very steep learning curve building these things,” says Gibson. “You look at a design on paper and then you try and translate it into something that you’ve never had any experience with, work really was quite slow so we actually had to replace them almost a year ago now.” The job went to a national plumbing company that had more experience.

Sure-fire ideas
There were, however, many things that the company got right the first time. One of them was the choice of the city of Auburn as farm site.

Auburn is an “opportunity zone,” Gibson says. “There are tax benefits to locating here, that’s number one; and number two, there are a number of aquaculture programs in the local colleges in Upstate New York. So the opportunity to tap into that labour source was irresistible because people experienced in land-based aquaculture are very few and far between.”

The staff all live in the area or within a general area, with most of them having a two-year or four-year degrees in either aquaculture or marine biology.

Auburn’s relatively lower cost of electricity and water was another advantage.

As anyone in the field knows, after feed, energy ranks second in terms of costs in a RAS facility, and much of that energy is used in pumping the water.  “In as far as energy costs, we’re 30 per cent more efficient than other land-based operations just because of the way that we have these built,” says Gibson.

And, by operating in a former mill workshop, the electrical infrastructure was already there so the company was able to lower the typical overhead costs associated with new land-based aquaculture facilities.

“That was a real bonus for us. We took this building, which is in an industrial park and was ready to go so we were able to construct over the course of about a year-and-a-half to get to where we’re at right now,” he says.

The decision to farm Coho was another thing the company believes it got right from the get-go. Gaining a competitive advantage in this space means distinguishing one’s self from the competition, says Gibson.

“The market is saturated with Atlantic salmon, there’s hardly any Coho salmon. Most of the Coho salmon is raised internationally, in Chile and Equador, and goes to the Japanese market and very little comes into the United States. So we really don’t have a lot of competition within the space. The wild Coho salmon fisheries have been functioning very poorly of late.”

The fact that Coho doesn’t have to have a saltwater component in the growth cycle added to its attractiveness because that quality makes it much simpler to raise, he added. 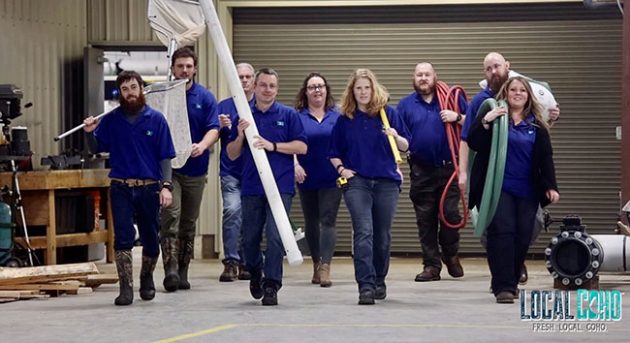 Some staff members at Finger Lakes Fish with CEO Phil Gibson (third from left, in the back). The opportunity to tap into the labour pool in Auburn was irresistible, says Gibson.

Focus on fish
Gibson became a partner in the company in 2017 after starting out in 2015 as an industry consultant. In that role, he leveraged his deep technical expertise on sustainability issues, earned from years working in fishing and production in southeast Alaska and later on as head of corporate seafood operations for the Safeway supermarket chain.

“The partners (behind Finger Lakes) reached out to me for consulting and marketing programs and then as I got more involved, I became an investor in the company. It just evolved to where I was asked to become CEO,” says the Washington State native who now splits his time between New York and his home state.

“I’ve gotten deeply involved in the environmental and sustainability aspects of the seafood industry,” he says. Thus, for him, leading a land-based fish farm that has sustainability as a philosophy and investing his own money into it was a natural segue.

“I’ve been an advocate of land-based aquaculture since 2005. What I brought to the company is the big picture. For the people that work here, the focus is on the fish and not on the business of marketing that fish.”

The type of RAS system plays a crucial role in ensuring that focus remains squarely on fish wellbeing and the farm’s efficiency. For that, the company brought in British Columbia-based John L. Holder of JLH Consulting, who champions the Mixed-Cell Raceways (MCR) technology developed by Barnaby Watten. But Holder put his own spin on it.

“What I’ve done is I put it together in a certain way that makes it very, very efficient,” says Holder.

MCRs or “MxCell” incorporates “circular-motion virtual tanks” into the traditional linear raceway. The payoffs are the consistent distribution of high-quality water throughout the rectangular tank and not just in the first half of it, as well as dependable distribution of oxygen and solids removal, Holder explains.

“Before, with standard raceways, because it’s a plug flow or an underflow, the best water quality is in the first half of the raceway. The next 25 per cent after that is still okay but the water in the last quarter of the tank is virtually not usable by the fish. By having the MxCell raceway, we’ve eliminated that problem because we’re putting 30 to 40 per cent of the water into these circular-motion virtual tanks. So the quality of the water at the beginning is as good as the water at the end of the raceway.  So all of a sudden you’re using a 100 per cent of that raceway when compared to 75 per cent in the old days,” he says.

He added that rectangular tanks are inexpensive to build compared to other systems such as the big round tanks that are typical in RAS facilities. “They are also very easy to use for grading and harvesting fish as everything’s on the same plane. It’s very economical: we only have to pump the water or lift the water by roughly 45 to 50 cm, which is virtually nothing.”

Finger Lakes Fish uses municipal water, which it dechlorinates to make it optimal for the fish. The facility has eight raceways measuring 7-ft. deep, 6-ft. wide and 80-ft. long, each of them containing 67,000 gallons of water. Maximum density per raceway is 85 kilos per cubic metre.

“But we’re nowhere near that density yet,” says Gibson. “We’re running way below capacity right now, we’re running at about 45. We bring in, every three months, about 120,000 eggs from our supplier in British Columbia. We use heat trays for incubation and that’s the capacity our incubator trays could do right now. We’re still building our inventory.” 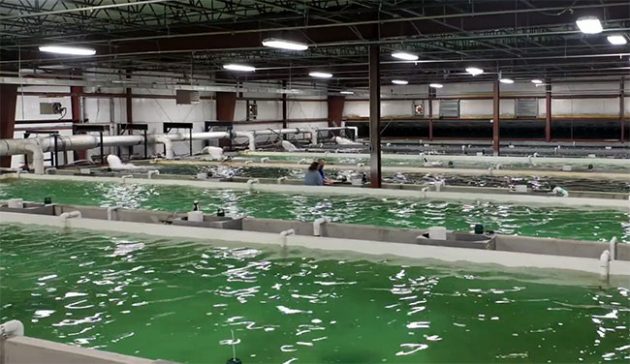 Looking very much like the traditional raceway, these are actually mixed-cell raceways that have built-in ‘circular-motion virtual tanks.’ Photo: Finger Lakes Fish

Due to COVID-19 lockdowns, running below capacity may well work in the farm’s favor. Since April 2020, it has been harvesting small batches of coho weighing between 3- and 4-lbs each. The fish reach this weight within 16 to 18 months from hatching.

“The fish that we have are not large enough for the grocery trade yet. So one way that we’re selling is to go into food service. Now that the areas are beginning to open back up, you’re getting more restaurant trade.”

Finger Lakes Fish only sells head-on gutted Coho currently. Once the facility is in full production, it will work with processors who will distribute the fish themselves.

“We’ll have our own customers but our processors will also be our customers and they will sell to their food service and retail customers.” It would be ideal, he says, if clients sell the product under the LocalCoho brand at least initially. “But I’m not going to be insistent on that because we need to build business,” he says.

Today, “getting the system to operate correctly” is the biggest challenge before Gibson and his team.

“There’s a pretty steep learning curve on making sure that we get the water levels right, that we maintain water quality, that we build the biofloc for the filtration system to be more efficient. That takes time. That’s not something you just put a bunch of media in the water and it’s immediately going to go to work. You’re going to have to build bacteria levels up and that takes quite a bit of time and  you can actually destroy that bacteria if you don’t handle the water properly.”

Mortality rates in the grow-out phase have been at three to four per cent, but  it’s something that can still be improved as efficiency and precision improves.

Automating operational processes is currently in the works.

“While we were in building stages any fish transfers or grading were done by hand, which stresses the fish. Right now we’re installing the fish pumps and graders and counters so that we can make this a whole lot more efficient and less stressful.”

As for the big picture, Gibson sees expansion beyond this 370-tonne pilot facility. The plan, or at least the hope, is to roll out twelve 2,000-tonne facilities in several locations across the United States over the next 15 years so that LocalCoho is always close to the market.

“I really believe this is the future. And like I said, I put my money where my mouth was. I’ve been advocating this for 15 years. So, instead of just buying stock in a company and just watching it either grow or not grow, I get to participate in the miracle of land-based aquaculture.”