Yellowtail kingfish could be a perfect candidate to raise in a recirculating system. Photo: lindsay_imagery/ GETTY IMAGES

Yellowtail kingfish (Seriola lalandi) has received a bit of media attention recently, mainly for announcements of expansion plans and new projects. However, while Yellowtail kingfish is not a ‘new’ aquaculture species, it is still far from being a mainstream species and it is produced in small numbers around the world.

The largest global producer of Seriola sp. is Japan, with an estimated annual production of about 135,000 metric tons from which only 3,819 metric tons is S. lalandi, according to data from Japan’s Ministry of Fisheries Agency, 2019).

Currently, all the Seriola sp. in Japan are grown in sea cages, though interest and demand for RAS is increasing. While the majority of juveniles in Japan are wild caught (the majority are S. quinqueradiata, hence the lower production figures of S. lalandi), juveniles in all other countries are hatchery reared.

The basics
Yellowtail kingfish (S. lalandi) is an open water, fast swimmer and temperate water (16-24 C) species of high value, with firm white-pinkish flesh and high omega-3 content. It is one of the fastest growing fish species and can reach 2.5 kilograms within a year. That is two to three times faster than other popular Mediterranean fish such as Gilthead sea bream and European sea bass. Due to its fast growth and high market price and acceptability, the return on investment, or ROI, for this species is much faster than any other aquaculture temperate species currently grown.

In Europe, unlike Greater Amberjack (Seriola dumerili), Yellowtail kingfish is not endemic to the Mediterranean Sea. When comparing the two species S. lalandi and S. dumerili, it is clear that S. lalandi is easier to breed and culture with no requirement for broodstock hormonal induction (a very hard and stressful operation for the fish due to its size and its sensitivity to sedatives), less larvae aggression and cannibalism and ease of culture.

It has a variety of market segments including fresh filets, cutlets, and plate-size whole fish (reaching that size within three to four months). It can be served as fresh sashimi or in any variety of cooking.

Why RAS?
Yellowtail kingfish grows well in sea cages. However, the main health problem in sea cage culture is flatworm (fluke) parasites (Benedenia seriolae and Zeuxapta seriolae) that inhabit the skin and gills in Yellowtail (Sharp et al., 2000). These flatworms can cause reduced appetite, slower growth, and in extreme cases, cause death to the host by loss of osmotic control (skin flukes) or anoxia (gill flukes) (Sharp et al., 2001).

Treatment is usually hydrogen peroxide bath or praziquantel. However, in Australia, incorrect doses due to human error and/or other factors have led to numerous fish mortalities which have resulted in heavy losses and business shutdowns. Other environmental issues such as ‘red tide’ can influence cage culture which has caused mortalities in Japan.

Using RAS eliminates these issues. If managed correctly, RAS should prevent any pathogen infection and remove the need for expensive and stressful treatments. The extra cost of running RAS can be compensated against the potential losses of whole cages due to the parasite treatment issue.

As mentioned above, Yellowtail kingfish is not endemic to the Mediterranean Sea. Hence, it can only be cultured in RAS systems. In other parts of the world, where cage culture is still an issue in terms of regulation, as well as public attention to environmental impacts such as the USA and Canada, RAS systems present a viable alternative.

Yellowtail kingfish can be culture at high densities of 80kg/m3. This high biomass contributes to the efficiency of production. However, at these densities, any issue such as power outage, oxygen supply, water exchange will have immediate consequences. Hence, alarms, backups and redundancy of systems should be an important consideration during the systems design.

Recent data has also shown that fish reared in RAS had no off-flavour taste (as can happen in RAS) with no purging required (Bok & Grant, 2022).

The long road ahead
In a 2007 article I co-wrote for WAS Magazine, titled “Yellowtail Kingfish Culture – Opportunities and Problems,” I envisaged that the species would become an emerging species in marine aquaculture. So, why after two decades of R&D and industry development around the world, is the aquaculture of Yellowtail still in its infancy? 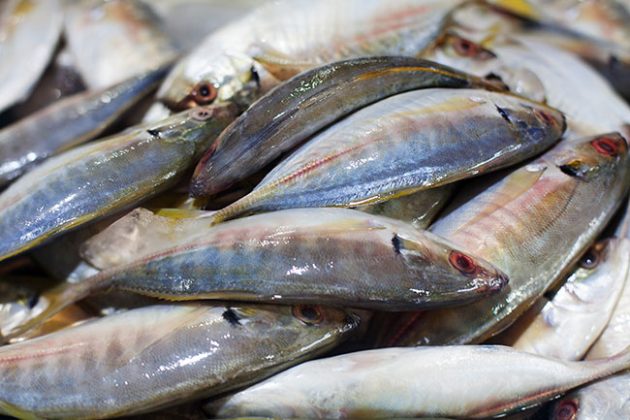 While yellowtail kingfish known in the major markets, it is not a main seafood like salmon or seabass. Photo: Vera NewSib , Adobe Stock

Juveniles availability
One of the main bottlenecks in the development of any aquaculture project is the continuous supply of juveniles. Developing mature broodstock which will spawn regularly (in and out of season) takes time. Most, if not all the commercial companies (aside from Japan) developed their own broodstock. Most are still limited to one or two groups of broodstock which only spawn during natural seasons. In most cases, the genetic pool is limited and from one source or even one batch of fish. Because S. lalandi is not endemic to the Mediterranean Sea, all eggs/larvae are imported. For the past decade, there is only one commercial hatchery in Chile which supplies S. lalandi around the year.

RAS development
Over the past several years, RAS technology has advanced to industrial scale. However, the majority of large-scale systems are designed for salmon. Yellowtail kingfish has different rearing temperature, metabolism, activity and nutritional requirements to salmon. Some initial attempts have resulted in failures. Current commercial companies developed their technology with time and experience. It is safe to say that, in most cases, there was a gap between initial production predictions to the reality of producing Yellowtail kingfish in RAS.

Market development
While Seriola sp. and specifically Yellowtail kingfish are known in the major markets (i.e. Europe, USA), it is not a main seafood species such as salmon, sea bream and/or sea bass. In some cases, market prices were low due to influx of wild caught or imported fish. A Mexican company reported some difficulties selling Yellowtail kingfish in the US, to the point of reduced production and even putting the hatchery production on hold. On the other hand, two other Mexican companies are in full production of S. rivoliana.

Proven versus unknown
Yellowtail have not encouraged investment. This is especially clear when comparing to other “bread-and-butter” species such as salmon, sea bream and sea bass where the technology is proven, there is no shortage of juveniles and the market and costs are known. There are only two companies growing Yellowtail in Europe and both are still at relatively low production capacity.

Has the time arrived?
Yes, it seems that the time is now for Yellowtail kingfish in RAS. Technology has taken a large step forward over the past decade and current companies are expanding and/or re-developing based on lessons learned with existing systems.