Norwegian brothers jump on RAS bandwagon, and they’re confident they have the trump card. 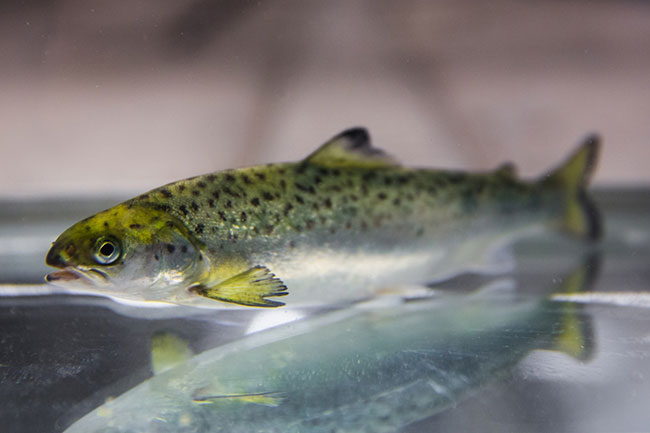 Brothers Stig and Ole Bakke were partners in a salmon farming venture in Norway in 2014 when they met the founders of AquaMaof, the Israel-based specialist in recirculating aquaculture system (RAS) technology.

That meeting would prove fateful.

“We were fascinated with the technology,” Ole says of what he saw during that visit at AquaMaof’s RAS tilapia farm in Poland.

Although the RAS specialist would later abandon tilapia production in favour of higher-value Atlantic salmon, it was by no means a measure of the technology’s weakness. If anything, the market-driven decision points to the flexibility of the technology, says Ole.

“It functions with tilapia very well and in other species, such as salmon. They have improved the production of salmon in land-based facilities over the past few years, and there have been no accidents. That’s important,” he says.

Just a few months following that meeting, the Bakke brothers would decide on a new direction for themselves. They believe they could help solve a long-standing problem of Norwegian salmon farmers – the inadequate supply of big post-smolts – by producing smolts year-round in a closely controlled on-land facility using AquaMaof’s RAS technology.

“We have been in fish farming since the ‘80s and we’ve noticed there’s a problem in getting big post-smolts,” says their younger brother and co-founder, Petter. “Over the last 10 years, we have only been able to release 120-gram smolts, but we see the advantages in releasing bigger smolts. The industry is screaming to get it.”

In recent years, salmon farmers have been raising smolts longer in land-based facilities before moving them to ocean cages where they will grow to market size. This means the fish spend less time in the sea where they are more exposed to risks, such as inclement weather, fluctuating water temperatures and sea lice. This also reduces salmon farming’s environmental footprint due to less need for sea lice treatments and reduced sludge deposited into the sea.

But the average size of smolt in Norway today is only 175 grams, says Petter. “So, if everybody is going to have 500-gram smolts, the smolt capacity has to be tripled.

In 2015, the brothers proceeded with the many steps required to launch a new business venture, which they would later call Smart Salmon. While still running their existing company full time, the brothers spent the next five years securing the required licences, networking with investors, and searching for equipment suppliers and people to work for the company.

In late 2020, Stig and Ole sold the other company to focus fulltime on Smart Salmon. A 45,000-sqm land in Smørhamn in Bremanger, two salmon farming licences, and a preliminary design for the facility are now in place.

Meanwhile, work on securing licences to build a 10,000-tonne land-based facility in France that would produce full-grown salmon for the local market, is underway.

The Bakke brothers believe that Smart Salmon is well placed to tap opportunities in the farmed salmon industry. Bremanger is located in Vestland county, which is centered around the city of Bergen, often referred to as Norway’s aquaculture capital. Farming giants Mowi, Lerøy and Grieg Seafood are located in the area.

Smart Salmon plans to supply 500-gram smolts to salmon producers of all sizes, including major salmon producers whose in-house production of smolts is not enough to fill their needs. Small salmon farmers that do not have the ability to have their own smolt farms are also their target.

Smart Salmon will build up capacity in two phases: the first entails building a 2,500-tonne facility that will produce 500-gram smolts, and the second phase will scale up that production by an additional 5,000 tonnes.

The second-phase facility is licensed for growing full-size salmon; hence, the Bakke brothers refer to it as a “flexible farm.” The intent is to raise roughly a thousand tonne market-size (5 kg) fish a year just so they could learn and refine the RAS technology in preparation for the 10,000-tonne growout facility they plan to build in France.

The case for post-smolt production
Ole noted that one of the many advantages of focusing on big post-smolts, is there’s little competition because there’s not a lot of third-party suppliers like them.

Risk reduction is another. “There is less risk to produce a 500-gram fish than a five-kilo fish because you don’t need to have it in the facility for that long,” says Petter.

In their calculation, there’s also more revenue to be had in producing big post-smolts compared to market-size salmon. The sales price of a post-smolt is almost NOK 100 (US$11.60) a kilo, compared to a full-grown salmon which is, on average, NOK 60 (US$6.95) kilo, he says.

“When you sell full-size salmon, you sell it gutted, which means you lose 17 per cent of the fish. But if you sell post-smolt, you sell it whole. So, if you compare the weight to a full-grown slaughtered fish, the kilo price for post-smolt is around NOK 90-100 (US$10-11).”

Besides, the price for post-smolt is stable throughout the year and from year to year, he notes. “It’s like infrastructure for the sea farming industry.”

Smart Salmon’s business model appeals to investors. Three equity financing rounds to date have netted NOK 47 million (US$5.3 million) from 80 deep-pocketed backers who believe in the company’s potential. It also has secured a NOK 220 million loan (US$25 million).

Investors include biologist and fish farming pioneer Bjørn Myrseth, as well as Olav Refvik, a self-described “fisherman and investor” but also a Wall Street legend known for his savvy in the US fuel commodities market.

Petter notes that Smart Salmon investors are mostly Norwegian. Myrseth is not merely investing money but also offers time, expertise and advice on the design and building of the facility, he says.

AquaMaof is also an investor. It holds a 7.3 per cent stake. As tech supplier, its involvement continues long after the technology’s sale is concluded. Such arrangements – where tech providers become a part of the value chain with their clients – may hold the key to de-risking RAS, explains a financier who was involved in early land-based RAS facilities built in Scandinavia.

Man power and technology
Under the deal with AquaMaof, an expert from its Global Training Centre in Poland will be stationed in Norway to serve as adviser/co-manager during the first year of Smart Salmon’s operation. Smart Salmon staff will be trained in AquaMaof’s indoor fish production platform at the Polish training centre.

“We are in the middle of the biggest fish farming clusters in Norway so there’s a lot of skilled people we can tap here from both sea-based farming and land-based smolt facilities. We also have the opportunity to send people to Poland, to the R&D centre, which we will do even before the facility’s construction is finished,” says Ole.

Ask any land-based salmon farmer their biggest fear, it would undoubtedly be mass mortality of fish. Saltwater has naturally high sulphate content, which could reach toxic levels and turn into poisonous hydrogen sulphide (H2S) if not detected early. The toxic gas has recurrently figured in mass mortality events in salmon RAS facilities, in recent years.

AquaMaof technology has low risk for hydrogen sulphide toxicity, says Ole. “There’s been no H2S accidents in AquaMaof facilities. H2S is what causes the big catastrophes in RAS.”

The use of a sedimentation tanks instead of drum filters, which requires water to be forced through with powerful pumps, is key in the stability of the technology, says Petter. “Less can go wrong when the water does the job in the filter itself,” he says, noting that the use of technology that includes drum filters to purify water for reuse have caused biological challenges in Norwegian RAS facilities.

Energy use is a major consideration in AquaMaof’s system design. Ole says it will take 3 KWh to produce 1 kg of fish, including the production of oxygen. For fish production alone, the energy usage is approximately 2 KWh to produce a 1 kg fish.

Water use is minimal. “AquaMaof technology was developed in Israel, where they have very little water. They are only allowed to fill the water tanks once a year or at least release water once a year. So, they have been forced

to develop a technology that uses minimal water, which could also be reused almost 100 per cent.” 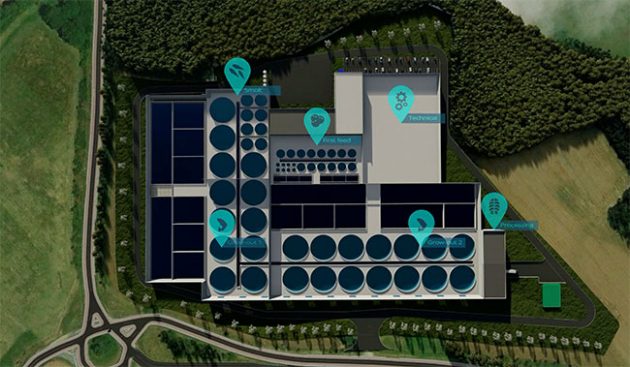 An illustration of the 10,000-tonne salmon farm located just four hours from Paris. The farm is seen adapting a circular production model.

Plans in France
Depending on how the Norwegian operations turn out, the Bakke brothers are planning a third facility, in France. It will be in collaboration with local fish farmer Arild Lokøy, who holds a 20 per cent stake in Smart Salmon France. Lokøy could help ease Smart Salmon’s entry into the French market, notes Petter.

“France is the second biggest market in the world for farmed salmon. The aim is to go to France and produce full size fish in the market. It is a very patriotic market and they like products made in France. They’re willing to pay

extra for domestic products and they like sustainable products,” he says.

The facility will be designed to adopt a circular production model, where sludge from the fish will be used as a resource for biogas and greenhouse production. It will also capture CO2 for use in the greenhouse.

“We see a big opportunity in France to produce a completely environmentally friendly fish, ideally zero carbon emissions, with less transporting and the possibility to brand it,” says Petter.

Smart Salmon is expected to have the license for the French operations by next year. In Norway, construction of the first-phase facility is scheduled to start this autumn.