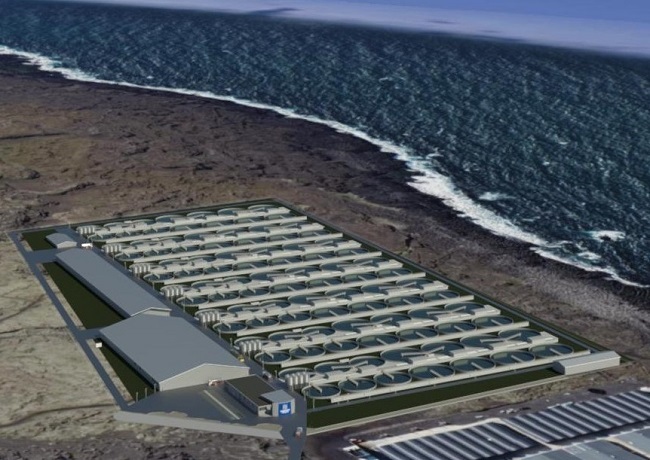 One of Iceland’s largest aquaculture companies has joined forces with the country’s privately-owned power company to develop a land-based salmon in Iceland’s southern peninsula.

The facility planned by Samherji hf. and geothermal and electricity company, HS Orka, will have a projected production of 40,000 tons of salmon annually.

The facility will be built in the Resource Park near the Reykjanes Power Plant, in the southwestern tip of Iceland. The ISK 45 billion (US$371.3 million) project will consist of a hatchery, an on-growing farm, a processing house, and service buildings. The partners plan to produce salmon with a low ecological footprint by using excess resource streams from the the power plant. 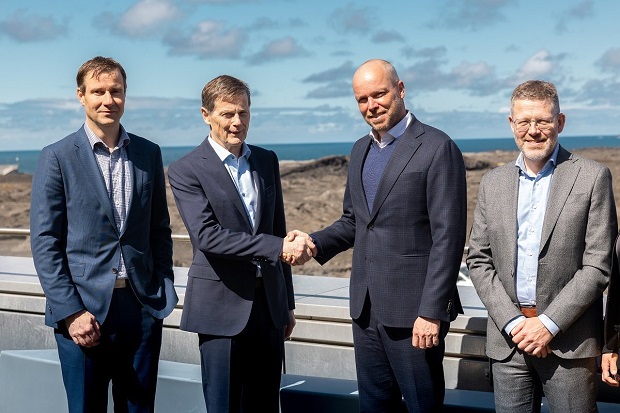 Thorsteinn Már Baldvinsson CEO of Samherji and Tómas Már Sigurdsson CEO of HS Orka shake hands on the agreement. By their side are Jón Kjartan Jónsson MD of Samherji Fishfarming and Jón Ásgeirsson VP Strategy and Resource Park of HS Orka. (Image: Samherji)

“The Resource Park’s ideology is precisely to promote better resource utilization. In this project, seawater from the Reykjanes Power Plant will be used to ensure a constant ideal temperature for fish farming,” according to Tómas Már Sigurdsson, cheif executive office of HS Orka. “With this agreement between HS Orka and Samherji fiskeldi, one more company is added to the diverse operations that already exist within the Resource Park.”

“We are excited to build in this area and to enjoy the benefits of close proximity to HS Orka and the Reykjanes Power Plant. In this area, there are some of the best conditions for aquaculture we have seen,” said Jón Kjartan Jónsson, managing director of Samherji fiskeldi. “The utilization of warm seawater flowing from HS Orka’s power plant is a major factor in making this project feasible.”