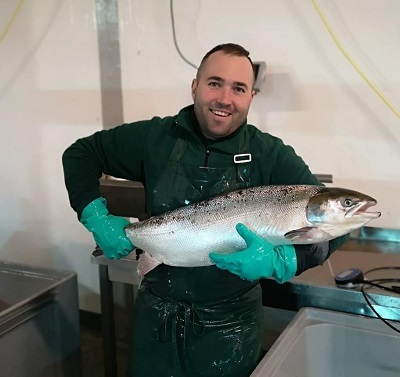 Global private equity firm 8F Investment Partners intends to develop a massive aquaculture venture in various countries around the world but wants to limit the capacity of individual sites to just 20,000 metric tons.

The firm is planning to farm some 260,000 mt of fish globally under its Pure Salmon brand.

“We will never go higher than 20,000t per project, from a risk management perspective,” said Martin Fothergill, a member of the 8F team in a recent interview with Undercurrent. “At 10,000t, you get the benefits of economies of scale; beyond 20,000t, you start to have risk from having too large a project in one location.”

He said the downside is not limited to biological risks.

Beyond 20,000 mt, operators could encounter various problems including stumbling blocks such as political and taxation issues, said Fothergill.

That is why in China, where 8F plans a 100,000-mt project the firm has five separate sites, he pointed out.

According to Fothergill, the investment firm is targeting high-population, high consumption, and high-wealth areas in China. 8F will build sites in Beijing, Chengdu, Guangzhou, Shanghai, and Shenzhen. The population in these places range from eight million to 24 million.

“Demand is well-outstripping supply and demand growth is strong,” Fothergill said. “Even if you look at average global growth, it’s strong.”