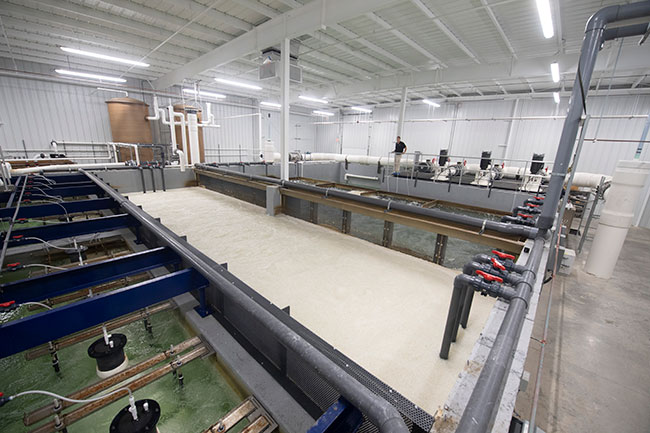 Around 750,000 gallons of water are recirculated daily through Ideal Fish’s closed containment facility.

Ideal Fish is not just a clever name, says president and CEO Eric Pedersen – the name reflects the principles and values that have guided the development of the company.

“It was looking at whether there were disruptive technologies that can be brought to bear on this industry,” says Pedersen. “But what grabbed me wasn’t the potential for technological innovation, although I think there is a big need for that. It was just the extent to which the fundamentals of recirculating aquaculture really address so many of the concerns that we have in this country around seafood supply.”

Pedersen has worked in companies in the water filtration space in the early 2000s and was struck by how combinations of biofiltration and membranes could be applied in aquaculture. With capture fisheries leading to the depletion of ocean resources and with mixed results from open caged farms in terms of sustainability, Pedersen says he saw a real opportunity for recirculating aquaculture systems to address consumer concerns.

“I think there’s a lot of pushback from the developed shoreline property owners, whether they’re industrial or residential, that will make permitting and getting cage farm operations off the ground very difficult,” says Pedersen. “Recirc, by the same token, can satisfy regulatory requirements much more easily.”

Pedersen says that between a low risk of escapes and discharging waste water to a treatment plant, the company had very little difficulty obtaining the necessary approvals to raise a non-native species in Waterbury, Connecticut. Today, Ideal Fish’s 65,000-square-foot facility, a repurposed button manufacturing factory, is on track to produce roughly 160 metric tons of Branzino or European sea bass (Dicentrarchus labrax) per year by the second quarter of 2020. The system contains roughly 750,000 gallons of water and recirculates 97 percent of that daily.

High-value
There is obviously an opportunity for raising Branzino in North America – virtually all of the species sold in North America are imported. Removing transit times makes for a fresher product. But the species is of high market value and well suited to growth in a recirculating aquaculture system.

“In order for recirculating aquaculture economics to work in the northeast United States, you need to raise a high value fish,” says Pedersen. “Tuna are a high value fish, but nobody’s figured out how to raise them in RAS yet. But Branzino had been raised successfully in recirculating aquaculture facilities. And it’s an ocean-going saltwater fish and commands a lofty price on the ice at fish counters in grocery stores and fish markets.”

The benefits of Branzino in a RAS system are myriad, notes Pedersen. Harvest weight is around 550 grams, so it’s not necessary to raise a very large fish. The breed’s feed conversion ratio is efficient, between 1.5 and 2, meaning lower feed costs. And, as a temperate species they can adapt to a wide range of temperatures.

“Our fish tend to do really well at human room temperature,” says Pedersen. “So we’re pretty much keeping our facility at a temperature level that’s comfortable for staff. And it’s a fairly robust fish. Like any fish, you have to be careful and gentle when you handle them, but it’s a fairly hardy fish and if you minimize stress, fish will do well and they won’t get sick.”

Well-known
Pedersen says that the species is beginning to catch on in the United States and he expects the market to grow larger in the future. Branzino is also well-known and understood as a farmed fish species – there is very little concern over stigma about farmed Branzino vs wild-caught Branzino as the wild-caught industry has been steadily shrinking over time.

“Most people who are knowledgeable about eating Branzino know that it’s farmed and can appreciate how getting a local fish that’s farmed in a far more sustainable way, that doesn’t require antibiotics or any other veterinarian additives to keep the fish healthy, is a good thing,” Pedersen points out.

Commercial production of the species in North America is very limited and, to Pedersen’s knowledge, outside of research laboratories there are no facilities anywhere in the world raising the species in a RAS system.

Eric Pedersen, president and CEO of Ideal Fish, is very excited about a new avenue the company is pursuing – a smoked branzino product.

With a harvest size around 550 grams, a good feed conversion rate and suitability to a wide range of temperatures, Eric Pedersen says that branzino, a.k.a. European sea bass, is an ideal species for RAS.

Smoked
While the company has grown according to the principles that its chief executive initially envisioned, he is very excited about one new development not in his original designs – the company is in the process of launching a smoked Branzino product.

“We believe that this will be a fairly major product line for us, absorbing half or even the majority of our production,” says Pedersen. “The reaction that we’ve gotten in the market to our smoked fish has been exuberant and somewhat unexpected. Branzino smokes very well, it has a wonderful texture. It’s an oily fish, but it’s not very oily. Your hands aren’t dripping after eating it with your fingers. And it just has a wonderful texture and flavor and holds the smoked flavor very well.”

The smoked Branzino product will be introduced towards the end of 2019. Pedersen says the company currently has the capability and capacity to handle all production inhouse, but will likely look at co-packers if the product catches on as he expects.

Money matters
The company’s biggest challenge has been accessing the necessary capital to grow the business. Aquaculture in general already has fairly low margins and, as Pedersen admits, RAS systems are very capital intensive. While he has seen institutional capital markets starting to look at some very large salmon projects, the return on investment is, as of yet, too low for significant interest in RAS.

Looking to the future, however, Pedersen feels that aquaculture is becoming increasingly ubiquitous, and that someday there won’t be any distinction between farmed fish and wild fish, there will only be fish. The bloom is already off of the rose of wild fish, he feels.

“Wild fish are typically not very fresh. Trawlers have to go further and further off shore to find fishing grounds and they are away for sometimes weeks at a time, so the fish caught early on in the trawl are going to be old. And the ocean has become our dumping grounds, and the waters are certainly not as pristine as the water that we raise our fishes in at our facility. I think we’re going to begin to see it soon.

“There really is a huge opportunity in this country to create a sustainable, antibiotic-free, hyper-local, traceable industry around fish production,” Pedersen adds. “Recirc aquaculture is going to play a very large role in the development of a robust domestic supply of high-quality seafood.”