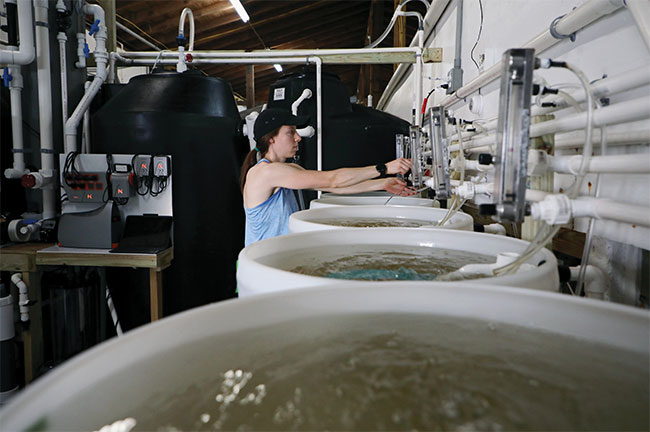 Flow-through larvae culture tanks for the RAS system, each with roughly 100 litres of water and three million larvae. They have RAS water flowing into and out of them at all times. Photo: Aileen Devlin | Virginia Sea Grant

Oyster hatcheries up and down the Chesapeake Bay remember 2018 and 2019 as years of record rainfall that drove down the bay’s water salinity to detrimental levels.

The right level of salinity is crucial to oyster reproduction. The severe downpours lowered salinity to less-than-ideal levels, delaying production of oyster larvae at many hatcheries. But for some, like Oyster Seed Holdings, it was worse.

“We couldn’t even get eggs to fertilize correctly,” recalls Michael Congrove, president and majority shareholder of the hatchery, located in Mathews County, Va. “That year we were only able to produce 50 per cent of what we would normally produce in a year. It’s not quite half a million dollars that we lost that year because of that type of event.”

Whether it was a blip or a harbinger of things to come, growers and researchers are not taking any chances. As climate change makes seafood farming trickier, studies on how to climate-proof oyster culture are underway in many parts of the United States.

One of them, an exciting, private initiative in Maine, aims to break the dependence of oyster culture on unpredictable seawater quality by growing oysters from seed to market-size in inland facilities using recirculating aquaculture systems (RAS). It has bagged some funding from the United States Department of Agriculture (USDA) and is now past the proof-of-concept phase.

Congrove’s effort is arguably more down-to-earth, yet also commendable. He and experts from the Virginia Institute of Marine Science (VIMS) and the Virginia Tech Seafood Agricultural Research and Extension Center have been looking into the potential use of RAS in climate-proofing oyster hatchery culture – but only in the early part of the oyster larvae’s lifecycle.

“We (Oyster Seed Holdings) have been operating this hatchery for 12 years now and no season is ever perfect. We always deal with some level of water quality issues. In 2019, we were below 10 parts per thousand (ppt) for about six months – almost our entire production season. We were below 7 ppt for about six weeks.

“And just to put a finer point on that, the critical minimum for Crassostrea virginica larvae culture is really about 10 ppt. It gets difficult when it gets to below 12 ppt, but it can be done. But below 10 ppt, it becomes extremely difficult. Really, for that entire season – in our case the most important part of our season, early in the winter – we struggled with production. We were at salinities that were just not conducive to larvae culture at all.”

While oyster hatcheries have become very good at solving water quality issues with the use of traditional single-pass filtration type methods, the low-salinity event in 2019 made them helpless, he says. “We couldn’t adapt a way to put enough salt back into the water to stay at our normal scale of production.” Not to mention all that freshwater brings all kinds of upland runoff and associated pollution into the watershed. 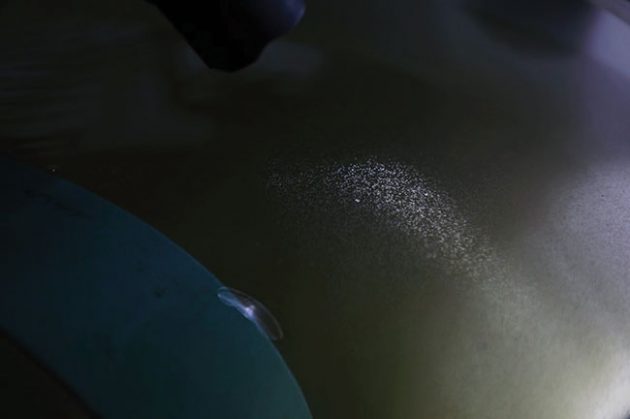 Photo shows larvae in one of the flow-through larvae culture tanks. The tank contains about three million, 12-day-old larvae. The blue structure on the left is a bank.
Photo: Aileen Devlin | Virginia Sea Grant

Gaining control over water quality
“It would be ideal to run (the hatchery) on ambient water part of the time and then switch to a recirculating system when that water became subpar for producing larvae,” says Congrove in summarizing the study’s goal. Think of it as having a fan on standby, ready to be put into action to help you cool down when the temperature rises.

“All we’re trying to do is close the loop in the first stage of their life, through the larval cycle, and get them through metamorphosis. If we can do that, then we’ve taken a really critical part of the lifecycle, which from a production standpoint is the most sensitive part of the life cycle, to ‘bulletproof’ status. This way, we’re no longer reliant on the potential variations of ambient water quality, as we can now have a consistent source of quality water.”

It is certainly not the first attempt for Congrove. In 2012, he embarked on a small study that would grow oysters from Day Zero to Day Six in a recirculating system – a crucial period in the bivalve’s life cycle. Those larvae would have then been transferred into a single-pass flow-through larvae culture tank on ambient filtered water.

But he ran into some problems. “We were trying to operate these as independent, continuously recirculating systems, and we weren’t able to grow larvae that small in systems that required continuous recirculating flow.”

Picking up the lessons learned from the 2012 study, Congrove and the team have incorporated a hybrid water-management system into the current RAS design. They have been growing the larvae on recirculated water all the way through the larval cycle, which is from Day Zero to about Day 14.

At this stage, they are now just about ready to set, so they are then transferred into a regular setting system that runs on regular hatchery filtered water.

He is optimistic this one will work. “What we bring to the table here is a lot of experience in large-scale shellfish larvae culture. By combining our experience in the production side of things with the experience of VIMS and Virginia Tech experts in the water-quality science side of things, I think we put together a really good team.” The study also has the financial backing of the Virginia Sea Grant Fisheries Resource Grant in the amount of $36,000.

He says having a Plan B for instances when ambient water quality become subpar will be transformational for the industry.

“Just for perspective, COVID-19 has been tough on the shellfish culture industry. We’ve certainly absorbed a lot of pain from that too just because our customers, the farmers, have lost their customers – the restaurants. The shellfish industry is taking a real hit from COVID and we felt that here for sure, but it certainly wasn’t as bad of an effect as a long-term, low-salinity event has on us as a hatchery.”

For decades now, RAS has been a proven technology in salmon aquaculture for growing smolt and post-smolt sizes. Congrove says the team borrowed the technology from the sector but adapted it for shellfish larvae culture.

“All the pieces are relatively straightforward; we’re not reinventing the wheel here. What we’re trying to do is to make a wheel that will carry the shellfish cart, not a fish cart. That’s going to take iterations in running a lot of larvae through them and having a good idea of what’s going on in these biofilters and adjusting them accordingly to try to get the best water quality out of them that we can.” 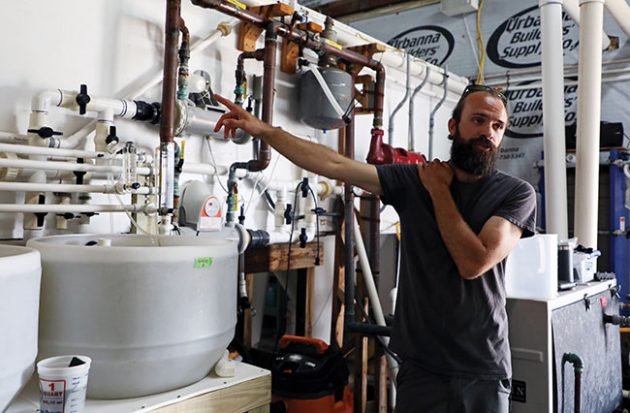 For instance, so far the team has reached only 50 per cent of their target production using RAS, but they still do not know the reason behind the poor survival rate.

“We don’t know the reason yet, in part because right now we really only have the capabilities of monitoring some relatively simple chemistry: temperature, salinity, pH and nutrient chemistry. That’s really about it. We did some more specific sampling in the startup of the biofilters but we didn’t have funding to continue that sampling throughout the project period.

“This is what I meant when I said we’re not entirely sure what to be looking for yet,” he continues. “In a finfish recirculating system, for example, one of the biggest drivers of water quality is ammonia and nitrite. There’s a lot of fish in the system, there’s a lot of waste being created – those are the things that you have to design the system around. In the larvae culture system, because biomass is relatively low, that is not a problem and reactors handle any kind of ammonia load with ease. We almost never see any spikes or buildup of ammonia or nitrite. We are starting to see the very smallest buildup of nitrate, which does mean that they are consuming these products – known as being ‘de-nitrified’ – and that’s happening but at orders of magnitude less than you would in a typical fish system, so that’s certainly not the problem. Therefore, we have to dig a little deeper to determine what might be going on and figure out what we need to do to make sure that we’re providing adequate quality water.”

Another unknown is the character of the media beds – what bacteria are on it and how those bacteria films are reacting to the inputs.

“There’s a lot of work to be done there too, and the primary focus of subsequent research in the next couple of years is to better characterize those media beds and the biofilms on them to see how we can perhaps adjust them to make them better at cleaning up the water.”

Virginia Tech has secured a grant of roughly $170,000 from the Saltonstall-Kennedy Program that will support these efforts. That study is scheduled to commence in January 2022.

In trying to find answers, Congrove underscores the importance of collaboration between industry and academics as well as financial support for such transformative initiatives.

“The good thing about an industry-driven grant program is it reflects how important a research question is to the industry. By taking it from an industry perspective, and an industry member being able to say that this is so important to us, that we’re willing to put together a team, write a grant and do the research, works,” he says.

“It’s just really helpful in getting industry-driven research accomplishments. Kudos to VA Sea Grant for maintaining such a program,” he says.