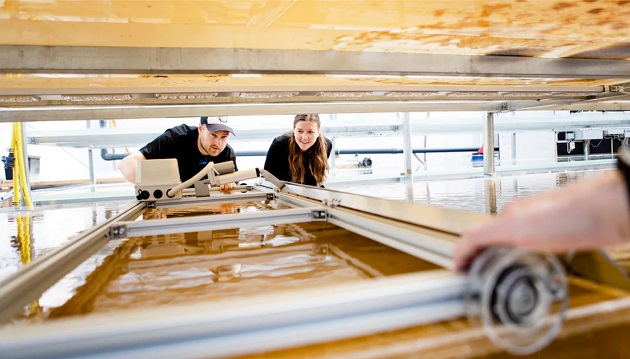 Aquaponics has become one of the most popular forms of secondary crop production. For many operators of recirculating aquaculture systems (RAS), producing secondary crops from nutrient-rich excess materials from their water-exchange systems can provide multiple benefits and potential revenue streams.
A Swedish company that produces algae using nutrients extracted from RAS now intends to build a large-scale algae factory in Europe to further research the benefits of algae.

Sofie Allert and Angela Wulff founder of the Swedish Algae Factory (SAF) recently raised some $7.5 million in the Gothenburg, Sweden-based company’s latest round of funding. A large chunk of that money came from sustainable aquaculture investment fund Aqua-Spark, according the Aquaculture Alliance.
SAF uses effluent water to harvest an algae. The company’s high-value product is called Algica. Algica is the silica shell of the algae. It is in demand by makers of personal care products, the solar panel industry and producers of fish feed and fertilizer.

Studying algae in the dark

Before founding SAF, Allert was studying biotechnology in Sweden while Wulff was a part-time professor who studied algae growing under the ice in the Antarctic.
The two women worked in a project that studied algae thriving in cold and dark climates. They found a strain that was flourishing in Sweden. The pair wanted that algae to use wasted nutrients in fish manure to create a product that was climate positive and friendly to the environment.
In 2014, Allert and Wulff were later approached by  Smogenlax, which is Sweden’s only saltwater, land-based fish farm. It was at this time that they realized they had an opportunity to create an algae farm by using the effluent water from Smogenlax’s RAS facility.
The two women built a 24-square-metre greenhouse. The fish farm’s effluent water flowed through their algae greenhouse before ending up in the waste water treatment site. This allowed Allert and Wulff to filter out the nutrients from the water.

Advertisement
Over the next two years they discovered that different parts of the algae had different uses for various industries.
For instance, Algica is a valuable ingredient for personal care products. It also has light manipulating properties that can boost solar panel efficiency by as much as four percent.
The shell of Algica is rich in omega-3 fatty acids, carbohydrates and proteins that can be used to make fish feed and fertilizer.
While Algica use in solar panels remains in research stage, SAF already has customers in the personal care industry in Sweden, Finland and South Korea.
SAF also sees a huge potential market in the fish feed and fertilizer industries.
With their new funding, Allert and Wulff plan to build a bigger farm that will allow them to bump up their annual production of Algica from 30 kg to one ton.
Print this page