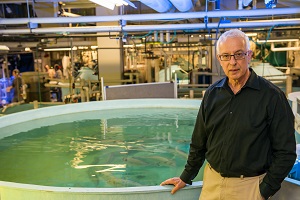 Yonathan Zohar (PC: Marlayna Demond - UMBC)
An initiative to build a network of recirculating aquaculture systems in Maryland received a shot in the arm with the release of a $1.2 million grant to a multi-state consortium studying how to optimize the in-land farming of Atlantic salmon.
The grant was awarded by the National Sea Grant Office of the National Oceanic and Atmospheric Administration to the consortium which is led by the University of Maryland and Maryland Sea Grant.
The money will go towards efforts to boost domestic aquaculture production and cut trade deficits associated with importing salmon.
The grant “offers an opportunity for domestic production of Atlantic salmon to replace all of these imports,” said Yonathan Zohar, the chair of the UMBC Department of Marine Biotechnology, in an interview with Eureka Alert. ” The only way to really scale that up is with land-based systems that are environmentally sustainable.”
As much as 90 per cent of seafood consumed in the United States is imported, according to the National Sea Grant Office. This puts huge pressure on wild stocks because only half of that number comes from aquaculture.
Importation of seafood also adds to the seafood trade deficit. The deficit is estimated to have reached $16 billion in 2017.
Building a network of RAS farms will transfer fish production to areas that are closer to local population centres. This, in turn, will lower cost and reduce the carbon footprint of production.
Other partners in the project include: Sea Grant partners in Maine and Wisconsin as well as the University of Maryland Center for Environmental Science, University of Maryland Extension, Morgan State University, the USDA National Cold Water Marine Aquaculture Center, the University of Wisconsin-Stevens Point Northern Aquaculture Demonstration Facility, and the Conservation Fund’s Freshwater Institute in West Virginia. Industry partners and collaborators include Superior Fresh in Wisconsin, Whole Oceans, LLC and Nordic Aquafarms in Maine, and American Salmon in Maryland.
Print this page