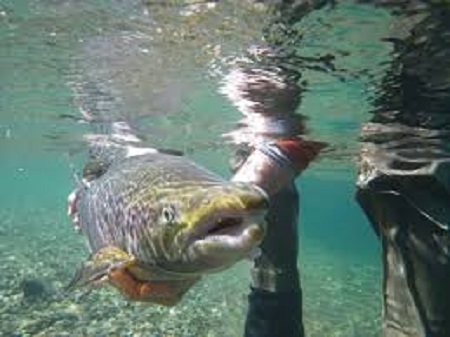 Members of an international organization dedicated to the protection and restoration of the Atlantic wild salmon environment listened to the case for land-based aquaculture during their annual dinner in New York last week.

Among the 400 attendees of the Atlantic Salmon Federation’s annual dinner were the chief executive officers of Atlantic Sapphire, Sustainable Blue, and Whole Oceans, a report from Forbes.com said.

While a huge source of protein supply, coastal open-net pen Atlantic salmon aquaculture has been blamed for the destruction of  coastal waters and fish environments and leakage of toxins into food sources.

Atlantic Sapphire is building what it has branded as Bluehouse. The company says it is the equivalent of a greenhouse but one that is designed for raising salmon. The Bluehouse that Atlantic Sapphire is building in Miami, Florida, has a capacity to grow 10,000 tons of Atlantic salmon. The water that will be used for the facility is naturally purified through limestone rock in a sustainable ancient artesian aquifer. The facility will also recycle 99 per cent of the water it uses.

Sustainable Blue operates a recirculating aquaculture system fish farm near the Bay of Fundy in Nova Scotia, Canada. The company is a producer of sustainably raised salmon.

Whole Oceans is a Maine-based Atlantic salmon producer. The firm is currently building a land-based fish farm at a former paper mill site in Bucksport, Maine.

Edgar Cullman Jr., the guest of honour at the dinner, spoke on the urgency of taking down coastal open-net salmon farms and switching to land-based aquaculture. Cullman is the former CEO of General Cigar and now managing partner of private equity firm Culbro.

Yvon Chouinard, founder of clothing company Patagonia, showed a clip from his film Artifishal. The documentary details the destruction caused by coastal open-net aquaculture. Chouinard, is an angler, surfer, rock climber, conservationist and also an investor in Sustainable Blue.