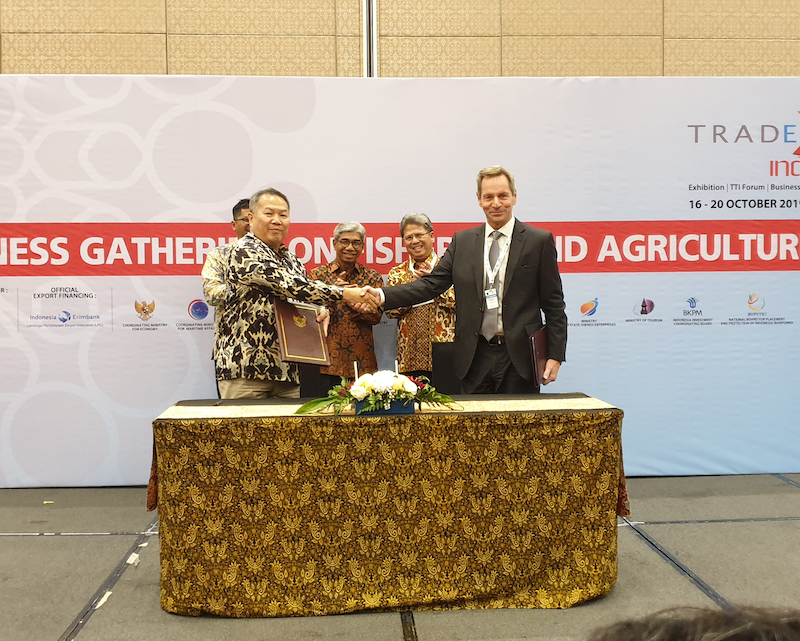 Ferry Budiman (left), director of PT El Rose Brothers, and Gisle Larsen (right), director of US Sterner, led the signing ceremony, which was held on October 16, 2019.

Negotiations between a group of Indonesian firms and the Norwegian aquaculture company Sterner AS could pave the way to a substantial investment in recirculating aquaculture system (RAS) technology in the Asian country.

The agreement between a group of Indonesian companies led by PT El Rose Brothers and Sterner AS last week at the 2019 Trade Expo Indonesia (TEI), according to a press statement from the Indonesian Embassy in Oslo.

PT El Rose Brothers intend to begin building an RAS facility in Yogyakarta Province in 2020. The facility will have the capacity to produce 2,500 tons annually of white snapper.s. Investment in the project could reach US$50 million.

PT El Rose Brothers also plans to build a hatchery facility to support the operation of the RAS facility, according to Ferry Budiman, director of the company.

“We are indeed aiming to become a producer of fishery products with onshore facilities within the next five years that will provide products for the domestic and global markets,” he said.

“This partnership project can serve as the basis for integrating Sterner’s foreign investment, RAS technology, and clean water management in Indonesia,” said Gisle Larsen, director of Sterner AS.

Sterner is a water treatment company. In the 1990s it began focusing on the aquaculture industry. As a prime supplier, the company offers plants for drying sludge from fish farming to a dry matter content of more than 90 per cent so that it becomes stable and can be stored without decay. The company builds modular RAS components.