September 13, 2021
By the experts at the Freshwater Institute

September 13, 2021
By the experts at the Freshwater Institute 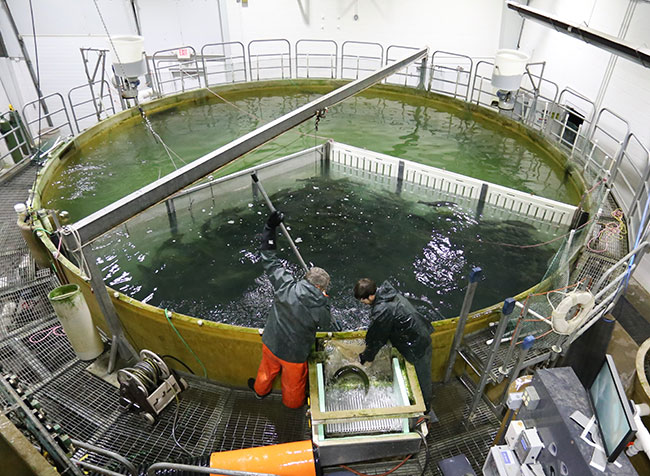 A crowded culture tank facilitating easy removal through a harvest side box. Photo: THE FRSHWATER iNSTITUTE

In the event of a fish harvest, move, or sampling procedure, RAS operators may find it necessary to crowd a tank of fish with a divider screen or seine net. While useful for the operator, crowding a tank is stressful for the fish and should be done with care.

Preparing for an event
It is important to select or adjust the divider screen, “crowder” slot spacing, or net mesh opening size to prevent excessive numbers of fish from passing through or becoming ensnared, leading to injury or death.

In preparation for a crowding event, check crowding equipment for damage that could include holes, cracks, bends in support structures, failing hoists or suspension cables, damaged hinges, or fraying pull ropes. Equipment failure while deployed in the tank will disrupt work and could present a major challenge for removal from the culture tank. Inspect nets for tears or frays and mend them prior to deploying into the tank. Confirm that any in-tank equipment such as probes, cameras, or plates are removed or in a safe position to prevent the crowder from becoming snagged.

Placing a crowder screen or net into a tank is an acute stressor that can cause fish to defecate while avoiding the equipment. Increased solids can degrade water quality and create an even more stressful or even hazardous environment. Withholding feed for 24 hours before a crowding event reduces solids production and minimizes fouling of the culture tank, holding tank, transport equipment, or sampling water.

During the event
Place crowding equipment into the tank gradually, holding tow ropes securely in rapid water currents. Slower introduction will be less stressful for the fish and allow them to move away from the working area to prevent being struck or trapped beneath equipment. When pulling the crowder or net tight, do so at a slow pace and consider giving the fish short breaks to acclimate to the smaller area and higher density. While crowding a tank closely monitor fish behavior for signs of stress.

If fish begin surface piping, rolling, or burrowing against crowder equipment, the fish should be given a break to acclimate, or they are crowded too closely and should be given more space. Likewise, monitor water quality parameters, particularly dissolved oxygen, while crowding a tank of fish. Increased activity and confinement to a smaller volume will cause fish to consume available oxygen faster. Consider increasing dissolved oxygen levels in the tank immediately prior to the start of crowding with normal oxygenation systems and if dissolved oxygen begins to fall to unacceptable concentrations, further increase output or activate back up diffusers. This will offset increased oxygen demand until dissolved oxygen concentrations increase and become steady.

Pull the crowding equipment only as tight as is necessary to complete the work. As fish are removed from the tank, the crowder or net can be pulled increasingly tighter to continue working at an efficient pace. Aim to complete the work in a timely manner so the crowding equipment can be removed, and the tank returned to normal operation as quickly as possible. If a break is needed while fish are crowded, pull back on the equipment to allow more space for the fish while away and pull the equipment tight again upon return to work.

After the event
Remove the crowding equipment promptly when work with the crowded tank is complete. Take care that no fish are trapped in the crowded area or in the equipment while removing it from the tank. Once the tank is returned to normal operating conditions, continue to monitor the behavior of the fish to confirm that they begin swimming normally, are not crowding water inlets, and are not clamped closely to the bottom of the tank.

Fish should return to normal feeding soon after the crowding event is over. Observe a feeding event to confirm fish are actively consuming feed. Fish may require an increased ration over the next day to achieve satiation and return to the expected feeding ration. While monitoring feeding look closely for signs of abrasion or injury from the crowding event. Damaged fish after a crowding event could indicate the crowding was too tight or a hazardous element exists on the equipment that requires repair. Damaged fish provide feedback to the operator to make improvements for future events.