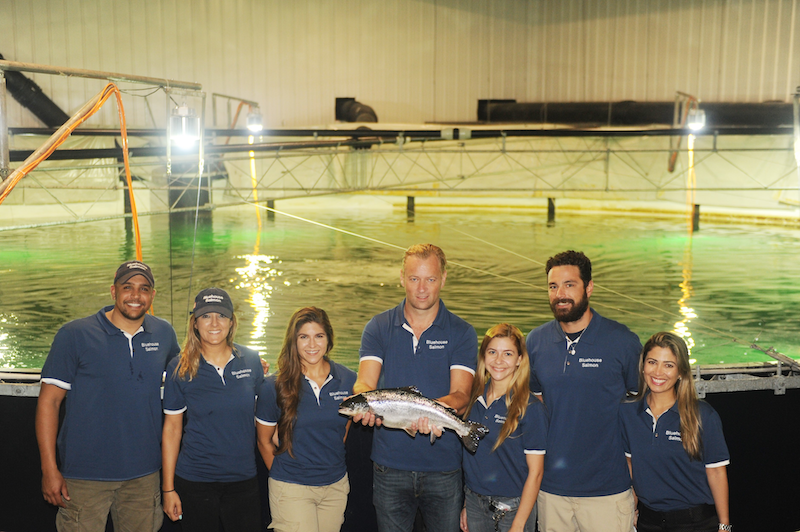 Atlantic Sapphire made its first commercial harvest of its RAS-grown Atlantic salmon from its Bluehouse farm in Florida on Monday, marking a major milestone for the company.

“We knew we had the potential to have an enormous impact on the salmon industry, and with much of the seafood imported into the United States, we wanted to continue to make a positive contribution by seeking out a location that would reduce the carbon footprint of salmon available in the North American market. Today we’re proud to finally start serving Americans delicious Bluehouse Salmon with a quality and freshness they have not experienced before,” Johan Andreassen, Atlantic Sapphire’s CEO, said at the time of the momentous harvest event.

The Chef’s Warehouse, a purveyor of high-quality artisan ingredients for chefs, will be among the first partners to receive the premium Bluehouse Salmon product, according to Atlantic Sapphire.

“The sustainability model, coupled with domestic production, makes this a no brainer for our chef customers,” a statement from the Cheg’s Warehouse said. “Within 48 hours from harvest, we will provide the foodservice community the freshest and incredibly clean tasting salmon that compares to no other.”

Atlantic Sapphire’s first Bluehouse harvest is an important milestone in the company’s 10-year vision of bringing sustainably-grown Atlantic salmon to the North American market. The first batch of salmon eggs were delivered to the Miami facility in November 2018 and have since been growing there amid ongoing construction of phase one of Atlantic Sapphires’s 80-acre land-based aquaculture facility project. The company expects completion of phase one by the end of the year.

Growing salmon while construction crews work in the background was not without its challenges, however. In July, Atlantic Sapphire reported it was forced to do an emergency harvest of about 400 tons of fish at one of its grow-out systems. They cited the possibility that “disruptive construction noise and severe vibrations” had stressed out the fish.

Upon completion of its phase one build, the salmon producer expects an annual harvest of around 10,000 tons of Atlantic salmon. The company has also secured the key U.S. water permits to produce up to 90,000 tons onsite, and has a targeted harvest volume by 2031 of 220,000 tons.