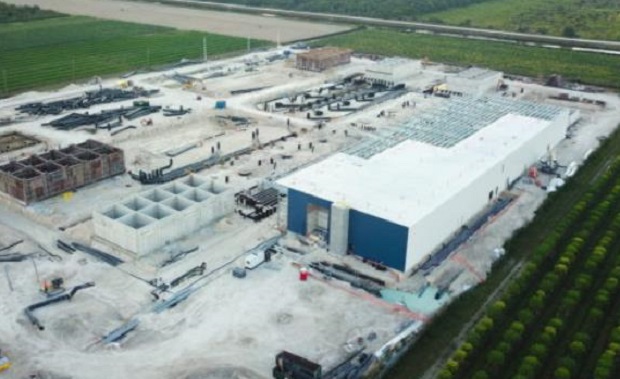 Atlantic Sapphire plans to produce some 240,000 tons of fish from a unique land-based salmon farm it has established southwest of Miami.

The recirculating aquaculture system facility called Bluehouse TM Miami is rearing its first crop of Atlantic salmon which is expected to be harvested in the last half of this year. The company aims to produce 100,000 tons of salmon by 2026 and 242,000 tons by 2031.

Atlantic Sapphire began building the 160-acre facility two years ago. The facility relies on 20,000-year-old salt and fresh water from the Floridan Aquifer which is about 2,000 feet deep. The water has never been exposed to man-made contamination such as microplastics, according to the company.

“Water is a precious resource that should be used responsibly; we recycle 99 per cent of the water,” the company said. “We use mostly saltwater and help preserve the Florida source of drinking water.”

The company first employed its BluehouseTM technology in the small village of Hvide Sande in Denmark back in 2011. This commercial pilot basically involved building a land-based aquaculture equivalent of a greenhouse. The facility demonstrated the ability to raise Atlantic salmon without the use of net pens in open water.

Inside the tanks, the water is continuously purified to remain crystal clear by a filtration system. The salmon will never have contact with sea lice or be exposed to wild fish diseases, according to the company.

The waste generated in the facility is used as fertilizer and the creation of renewable energy in the form of biogas.