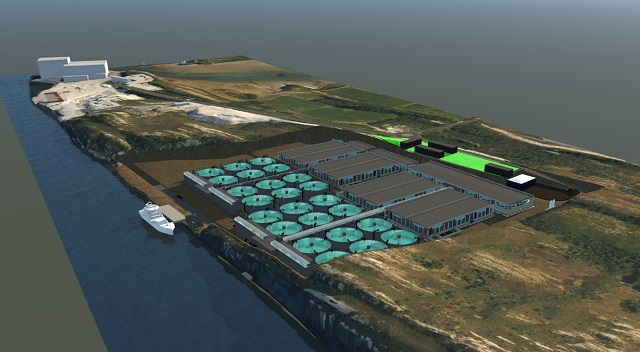 Land-based fish farm company Arctic Seafarm Langset AS, was granted a licence by the Nordland County Municipality in Norway to produce 15,000 tons of salmon per year at the company’s facility on the coast of Helgeland in the northern part of the country.

This will be Arctic Seafarm Langset AS’s first foray into land-based aquaculture.

The planned facility in Nesna Industrial Park will use a flow-through seawater system, which will be fed with fresh seawater. The plant will be powered by electricity from solar cells, hydropower, and recovered energy from production.

Arctic Seafarm is now “entering into an even closer partnership and collaboration” with Kvarøy Fiskeoppdrett AS, according to a press release from Arctic Seafarm. The company said it is now taking on the role of largest owner in the company.

Kvarøy Fiskeoppdrett AS is a family-owned company. Since its founding in 1976, the company has become a solid player in the aquaculture industry.

Alf-Gøran Knutsen, general manager of Kvarøy Fiskeoppdrett AS, is joining the board of Arctic Seafarm Holding AS, leading to an “even more integrated and exciting collaboration with the experienced fish farmers,” the press release said.