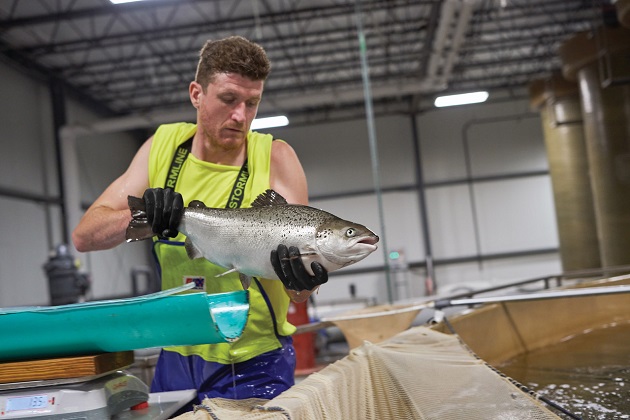 AquaBounty Technologies reports that it has received purchase orders for its planned harvest of five metric tons this month of the company’s AquAdvantage Atlantic salmon from its Indiana land-based fish farm.

The aquaculture company aims to to produce 100 metric tons of its AquAdvantage-branded GE salmon at its Indiana facility. The company’s  first harvest is scheduled to be conducted at the end of May. The company is also raising AquAdvantage salmon in another land-based farm in Rollo Bay, Prince Edward Island in Canada.

The harvest this month is the culmination of what the company calls AquAdvantage’s “30-year journey to market.”  The time frame included two decades of regulatory review which led to a United States Food and Drug Administration approval in 2015 and Health Canada approval in 2016.

The AquAdvantage fish is based upon a single, specific molecular modification in fish that results in more rapid growth in early development compared to conventional salmon.

The fish reaches harvest weight faster and more efficiently than Atlantic salmon grown in sea cages. Raised in land-based recirculating aquaculture systems (RAS) where the feeding cycle and growing environment are optimized, AquaBounty can produce up to 70 per cent more fresh salmon annually compared to conventional Atlantic salmon grown in the same period under the same conditions.