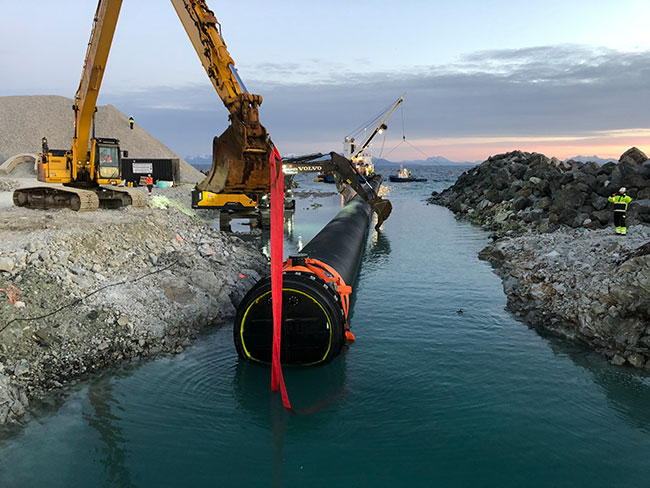 The water inlet pipeline that will serve as the main artery that will supply Andfjord Salmon’s underground pools with fresh seawater Photo: andfjord salmon

This spring, a Norwegian Atlantic salmon producer is set to commence its pioneering land-based farm using technology that promises to address some of the biggest challenges in both traditional ocean-based farming and RAS production, by taking the best of both these worlds.

Andfjord Salmon is relying on the natural advantages that Northern Norway offers to build an Atlantic salmon farm on shore and underground using flow-through technology, but with a twist.

Traditional flow-through systems – typically used in hatchery operations – involve setting up the fish tanks on land attached to pipes that pull water from a nearby water source into the production tanks. The process of lifting the water from the source up to the ground to reach the tanks require a considerable amount of energy consumption.

Andfjord’s concept takes the production tanks underground below sea leavel, so that seawater directly flows straight into the tank or pool, resulting in much lower energy costs.

“The concepts represent the best of traditional sea-based salmon farming and combined with advantages of being on land,” says Andfjord Salmon CEO Martin Rasmussen, in an interview with RAStech. “We have a very unique location… and if you want to have 100 per cent flow-through system, you have to have a very good location.”

Andfjord Salmon’s farm is being built in Andoya, on the northern tip of Vesterålen. This part of Norway offers optimal water temperatures for salmon farming in the Arctic region.

“Our flow-through system gives a continuous supply of fresh water, and the water has two key functions: to transport oxygen into the pool and transport CO2 and other metabolism products out of the pool,” explains Rasmussen.

Unlike in a recirculating aquaculture system, where up to 99 per cent of water is recirculated and reused in production, Andfjord’s system has seawater flowing directly in and out of the pools where the fish are growing. “We only utilize that water once, compared to others… where you reuse it. So it means that .. since we don’t have to lift it, because when you’re using a RAS system you have to lift it to release the CO2, we have a very low energy usage with our methods,” Rasmussen says.

Ideal conditions
Norway is the world’s second largest exporter of fish and fish products, owing to its vast 83,000-km coastline and pristine waters ideal for fisheries and aquaculture. The face of fish farming in Norway has evolved over the years, with an increasing number of land-based aquaculture projects being announced in recent years. Of the 23 land-based projects in the pipeline in Norway, only 13 are RAS while 10 will use flow-through systems, according to data from The Land-based Salmon Handbook.

One of the appeals of RAS facilities is the ability to locate the production farm closer to market, which scores some points on sustainability. Andfjord Salmon’s technology is likewise vying for some sustainability points but from a different front.

While Andfjord’s location cannot claim strategic benefits for being close to market, it is making up for it with what it expects to be lower energy costs when the farm is in commercial production.

“Since we have good water quality, with temperature profile, salinity profile, and also clean water, we can also have very simple and non-complex technology,” explains Ramussen. Andfjord Salmon will have two sources for water intake: the gulf stream at 160 metres, and the coastal water at 30 metres. The farm will access coastal waters in the summer, while the gulf stream will provide the warm water for the fish during winter seasons.

“That means we can have a very even temperature profile all year round, to have very good growth, and also I don’t have to use energy to cool down the water or heat it up.”

Another area for energy saving is in the design of the system, where water flows through directly from the sea right into the underground fish tanks or pools. Square-shaped pools, rather than circular tanks, will achieve a steady, laminar water flow, with no turbulence.

“Imagine that you have a vault in the sea and you just drill a hole in it, it will just automatically fill with water. And the same will happen with our pools. We have built it in the same level as the sea. So when I open up the pipes, it will flow water into the pool. So we are not using energy to lift the water, we are just using energy to create a river through the pool,” Rasmussen explains.

An important parameter in any sustainable aquaculture operations is fish health and welfare. The Andfjord Salmon CEO says the farm’s location and the natural resources that come with it, combined with the design of the facility will ensure the fish are given the best life throughout their lifecycle.

“It’s a very unique and genius technology because we can provide the fish with very good biological conditions, since we have a very even distribution of oxygen in the water and you get very homogenous environment in our pool.”

By installing the fish pools below sea level, the company is also hoping to address another important challenge with farming Atlantic salmon in traditional ocean net pens: sea lice.

Majority of the sea lice generally occur on the upper layers of the water column. By placing the production pools below sea level, fish can be kept away from these menacing parasites above.

“It means that we don’t have to use a lot of energy, resources and cost to treat the fish,” explains Rasmussen.

The flow-through system and the pools installed below sea level are all designed to keep operational costs down and the fish happily swimming in consistently clean water.

“We don’t need biological filter system to clean the water. One of the main problems with technology used today in RAS is that when it works, it works very good. But it’s very (reliant) on humans, the operators, and there’s always a big risk for something with fish. But with a very stable, (less) complex technology, we don’t have the same risk factor as the RAS system,” Rasmussen explains.

Project scope
The company is currently in the last stretch of phase one construction of the Atlantic salmon farm in Andoya, which involves the commissioning of the first of a total of 70 pools, once all phases of the project are complete. In February, the company reported it has successfully hooked up its water inlet pipeline and its flow-through system has been connected to the ocean water source.

Speaking with Rasmussen in December, the chief executive said his firm expects that the first batch of smolt will be released by spring 2021.

Currently, Andfjord Salmon has a production licence for up to 10,000 tonnes. The plan is to ultimately acquire licence for 70,000 tonnes of maximum allowed biomass, Rasmussen says.

“So we have all the land areas. We have already done this (licence application) in the first facility, so we will try to copy this for the next facility when it’s done.”

Anfjord Salmon worked with SINTEF, an independent research organization in Norway, to verify the technology it will be using for its farm. For the first phase of the project, the company received NOK14 million (US$1.6 million) funding from Innovation Norway.

Eventually, Andfjord Salmon will have the ability to release smolt during wintertime, with water intake at the depth of 160 metres, which ensures optimal winter temperatures for salmon farming, the company said in a press release.

Once all phases of the project are complete, the facility will have 70 pools in total, according to Rasmussen. The company is using the experiences learned during phase one construction to make the succeeding project phases go more smoothly.

“We assume the next construction will go as the first one so we have very good track record on the first building. As for the risk factors when you come into operational phase, when you look at the technology, we have tested the technology in a scale of 1 to 200 and it works; we tested in scale of 1 to 100, it works; and we had tested it in scale 1 to 20, and it works,” he explains.

Waste management
The steady laminar flow of water in the production pools allow for the fish waste to drop to the botton of the pool for proper collection.

Andfjord Salmon is partnering with a neighbouring company, Andøytorv, to collect and process the salmon farm’s waste materials. Andøytorv will use the nitrate, phosphate and other nutrient salts from the farm to produce peat moss, used in agriculture.

Research from the Norwegian Institute of Bioeconomy Research (NIBIO) has confirmed the potential of dried fish sludge from Andfjord’s land-based facility to be converted to organic fertilizer for agriculture and horticulture. This potentially provides another revenue stream for the Atlantic salmon producer.

The NIBIO report was developed on behalf of Andøytorv and Andfjord Salmon. The research institution explored both opportunities and limitations related to the use of fish sludge from Andfjord Salmon as a CO2-reducing component in products like growth media, soil improvers and fertilizer products for agriculture, gardening and other relevant areas of application, a press announcement from Andfjord indicated.

“We take care of all the waste to make sure of a very circular economy,” Rasmussen says.