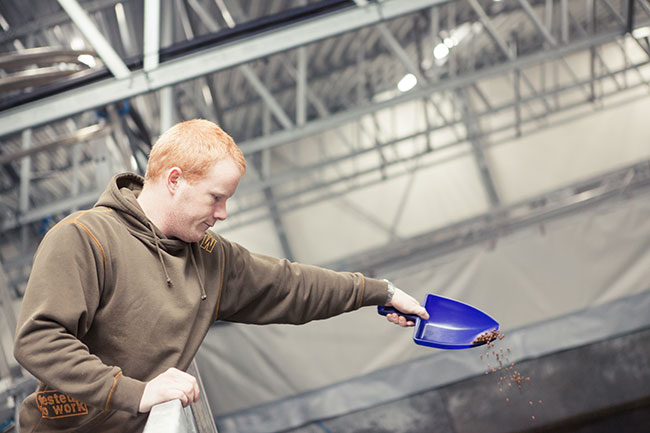 As a pioneer in the world of recirculating aquaculture operations, Danish Salmon’s chief executive officer Kim Hieronymus Lyhne lives and breathes the RAS business 24 hours a day, seven days a week — and he revels in the challenges it brings.

Danish Salmon started constructing its initial facility in 2012 and harvested its first batch of Atlantic salmon raised in its land-based recirculating aquaculture system in 2015. At the time, they were one of a small handful of other fish farmers doing land-based, closed recirculated systems. Over the years, Hieronymus Lyhne says the key has been to troubleshoot issues as quickly as possible and applying the lessons learned.

“It’s about avoiding problems and dealing with instability,” says Hieronymus Lyhne, who has worked with Danish Salmon, based in Hirtshals, Denmark, since 2014. In 2017, he became the company’s CEO.

This year, Danish Salmon is projected to produce 1,200 metric tons of live salmon. Through 2022 and into 2023, the company will increase its production, and in early 2023 it is expected to increase production to 2,750 metric tons (live weight).

“The current facility can produce 1,200 metric tons, but the construction of our new facility should be ready in March/April 2022. As soon as that is ready, we should have full production by the end of 2022/2023,” he explains.

The biggest market for Danish Salmon is Europe, and in particular, they are focused on keeping it local in Denmark. They process and ship fish in 24 hours and partner with Nordic Seafood which has sold its salmon locally and in Europe since it launched in 2015.

“We don’t focus on the United States market, China, Russia or South Africa because the whole idea is you produce the fish local instead of transporting it,” he says.

“With fish farming, and in particular with recirculating systems, you can spend 24 hours a day with the fish — it’s a lifestyle. I love that it’s non-stop 365 days a year, 24 hours a day,” he says.

Fish health focus
Hieronymus Lyhne has developed a keen sense for knowing when things aren’t going well for the salmon in his care.

Unlike livestock on a farm that shares the same environment with humans, he says it’s harder to tell if fish are experiencing adverse conditions in their environment.

“The only way we can talk to the fish is through behaviour analysis and the way they feed. For salmon, in particular, their only purpose in life is to eat and grow, so if they are not eating, that’s the fish telling you there’s something wrong – it doesn’t like its environment,” he says.

“Some of the things we have learned in terms of fish health is the need to address any issues early on, and it starts with feeding. You cannot rectify health problems a year into the production cycle of the fish, you need to do it immediately, so what we really focus on is feeding,” he says.

Early days for technology tools
With so many technology vendors reaching out to RAS farmers with solutions to help their operations, Hieronymus Lyhne says it can be overwhelming.

“RAS is a funny business because technology is huge, and it’s about to blow up even more. Technology suppliers are coming up with crazier ideas, and what they keep forgetting is that you’re farming fish; you’re not farming nuts and bolts. It’s live animals that you can’t communicate with – it’s about how do you know every single day that this fish is doing alright?”

While technology plays a significant part in recirculating aquaculture systems and Danish Salmon is trying to use artificial intelligence in its operations where it makes sense, Hieronymus Lyhne is skeptical of some of the new software tools on the market.

“We want to use it where we simply can’t provide enough attention in terms of monitoring feed waste, for example – we can’t do it 24/7, so we need help to do that,” he says.

“If AI (artificial intelligence) can provide what we believe it can provide and what the suppliers we are developing it with tells us it can supply, then AI will be a stable part of the 95 per cent of what we do. Monitoring the fish and monitoring feeding behaviour, collecting comparative data from all the sensors that we have and drawing conclusions that we probably could not draw in a short amount of time,” he says.

The last five per cent
Hieronymus Lyhne says Danish Salmon has the first 95 per cent of salmon production under control at its facilities – the rearing environment, the oxygen, temperature and monitoring of water levels.

“All of that is what all the sensors do. But it’s the last five per cent that is human action that makes the business or breaks the business,” he says. “With RAS, if you do something wrong, even five per cent wrong, you will have 100 per cent loss – you can’t do anything wrong when it comes to feeding in RAS systems.” 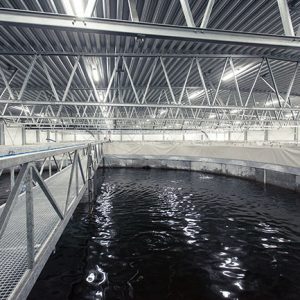 Danish Salmon is among the pioneers in land-based aquaculture in Denmark. PHOTOS: Danish Salmon 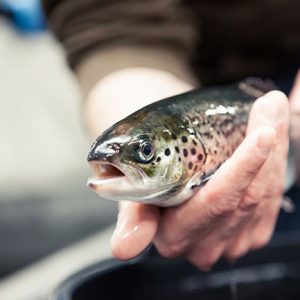 Learning curve
While demand for Danish Salmon’s product was affected by the pandemic, Hieronymus Lyhne has resolved that it’s an industry issue everyone must deal with.

“That’s the entire seafood industry,” he says. “We have to accept that market conditions are tough, but the market will bounce back at some point.”

He says staffing and people management are among the most significant issues facing RAS facilities right now.

“The biggest issue was financing, but now that these projects are coming online, they need staff, and it takes at least a year for staff to know even 50 per cent of what they’re doing; and in three years, you’re 90 per cent there. I think that’s the steepest learning curve I’ve experienced – every step you take has a consequence.”

When it comes to staffing, Hieronymus Lyhne says the RAS sector needs more people who are trained in managing the systems. Many employees for RAS facilities come straight out of university. When they come on board, they have a good understanding of biology and chemistry; however, what they teach at school doesn’t include managing the various challenges a system can experience.

“It would be nice to have a RAS education line of programs and have people come out of school having done RAS farming,” he says.

Sustainability
Denmark is one of the heaviest regulated countries globally in terms of wastewater and pollution, especially nitrogen pollution, so Danish Salmon is regulated on a discharge permit based on a specific amount of tonnes of nitrogen that can be discharged per year.

“For us to operate on the vision we have of 2,750 tonnes, we will need to filter more than 80 per cent of our effluent away, which makes us 80 per cent more sustainable in terms of nitrogen discharge than a kilo of salmon produced at sea,” he says.

He says that’s what also makes RAS interesting in terms of sustainability and environmental impact.

“We have seen that we can talk about environmentally sound production. You can measure what goes in and what goes out. The amount of feed you put in produces X amount of nitrogen and X amount of solids, and we filter it away and measure every single kilo of sludge disposal we drive away from the farm. There’s no escaping here – every single kilo of feed you pollute your system with has to go somewhere, and it cannot just go to the sea; it needs to be filtered.”

It’s another example of how RAS facilities like Danish Salmon are leading the way in providing a brighter future for the production of land-based fish for consumers who want a product produced locally and sustainably.